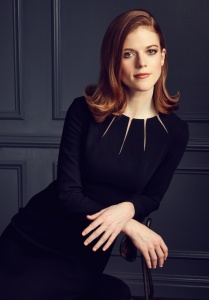 It’s official, The Good Wife is a franchise now. The spinoff The Good Fight stars Christine Baranski and Cush Jumbo as their characters Diane and Lucca. Rose Leslie plays the brand new character of Maia Rindell, Diane’s goddaughter who ends up working with her.

After the Television Critics Association panel for The Good Fight, I spoke with Leslie in the scrum, as we call it, where reporters follow up with stars from the panel. The Good Fight premieres tonight on CBS All Access, a streaming service without the restrictions of broadcast.

Franchise Fred: Since you were on Game of Thrones, is the language and sexuality of streaming still tame to you?

Rose Leslie: Do you know what? For the first time, I have now been filmed in a shower. So I felt that that was a new way of exploring the character’s sexuality without it being too gratuitous. I am hopefully very discreetly covering my breasts with my arm.

How awkward is it to film those scenes?

Rose Leslie: It was my first ever. I felt incredibly supported by the director, Brooke Kennedy. Then the wonderful actress who plays my girlfriend, Helene Yorke, she and I bonded and we realized that yes, this was something that was very true to the relationship that these two ladies have. It’s very loving, very comfortable in their own skin, incredibly comfortable with their own sexuality and they are there for one another. So it suddenly became the two of them, two souls together supporting them. So it was awkward for both of us. Of course, we didn’t do it in one take. We did it in a couple of takes but after the first take it was then kind of like okay, here we go. Let’s make sure that we can show them in the best light possible.

Honeymoon had some intimate scenes too.

Rose Leslie: Absolutely. That had some intimate scenes and you’re bang on, because we were in a shower as well. It was far more, as you say, intimate and behind the curtain as it were so it didn’t feel so much of a wide shot. Yes, that had some very intimate scenes. I actually saw the director last night at a viewing party which is really lovely. Leigh Janiak, that was a really lovely thing. I hadn’t seen her in a couple of years. 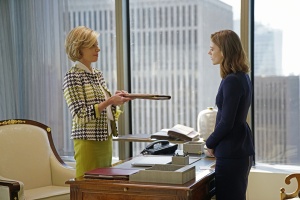 Tell us about Maia personally and professionally.

Rose Leslie: She is a young lawyer. We basically see her as a law student, literally on the cusp of taking her bar exam. Then suddenly very rapidly, the cushy life that she lives, a very privileged life she lives suddenly gets swept and taken out from beneath her feet. All the revelations of her father’s fraud and the Ponzi scheme spins everything out of control. Then she is taken into the wonderful, welcoming arms of Diane Lockhart. We see her process and struggle with the damage that something like that can do, and the understanding just how it ripples through everybody’s life. Obviously we kind of pulled it from the Madoff situation and just how appalling a catastrophe like this can be and the effects that it has on your day to day life and your mental health. It must be an awful thing to go through.

Is Maia going to be a lawyer?

Rose Leslie: She managed to pass the bar exam, yes. So she’s a lawyer herself.

Do you get some fabulous courtroom monologues?

Rose Leslie: So far, I still feel that I haven’t been given them yet. So yes, I think possibly Robert and Michelle [King] are hopefully waiting for that to happen. So far no, I haven’t had any court monologues. I can’t wait. I’ve heard the court days are very, very long so there’s a little bit of trepidation in approaching one of those long days but yeah, I’m looking forward to it. I think they are treating the character as a newbie in terms of having to see that process develop for her finally to own the courtroom and to own that floor and to make sure that she comes across as talented as she is.

What was the last thing you fought for? 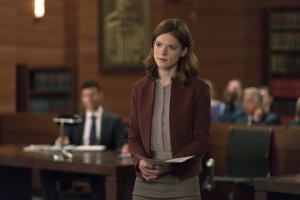 Rose Leslie: Can it be something really ridiculous and trivial? It usually is. I fought for a bagel this morning. Somebody was going to reach for it and I was like, “No, sorry. That’s the last one. I haven’t had breakfast yet.” Here, backstage. It was very rude of me.

Is doing a real world set show very different from fantasy, or is it all the same to you?

Rose Leslie: I would say that of course it’s different. Of course, it is. The wonderful thing about The Good Fight is that we are in present day. This is modern time and I get to wear some clothes that aren’t shrouded in fur. I get some high heels which are painful after a while. I would say the storyline particularly for The Good Fight is something that absolutely keeps me engrossed in this particular genre, in this particular world so it’s wonderful to b able to dip your toes in and out of all the different fantasy elements and go back to kind of reality.

How many times did you go in for this part?

Rose Leslie: I feel incredibly honored, the Kings asked me to play the role of Maia so obviously I jumped at the opportunity at being able to work and collaborate with them.

How is New York treating you?

Rose Leslie: What a fabulous part, to be able to accept a job and then live in New York City. It’s one of the world’s greatest cities so I feel incredibly privileged. Beautifully, because I’ve got the East River quite close to where I am, I think it’s rather wonderful. I am in Williamsburg so it’s really, really lovely. That area is just fabulous. You’ve got your parks and the water, but it’s cold. I’ve done one day of that. 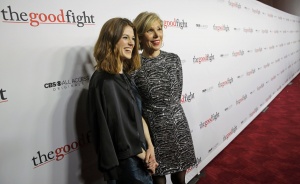 Rose Leslie: I’m from Scotland. My parents live in Scotland so that was my upbringing. It was cold. It’s very drafty. There isn’t any central heating so there’s no romantic element to living in a castle. It’s pretty freezing but wonderful to be able to play hide and seek with your siblings. I had an incredibly happy childhood.

So kingdoms have been in your blood.

Rose Leslie: You could say that, yes.

And your castle is available on Airbnb?

Rose Leslie: Yes, it’s wonderful. I’m one of five children. My parents, with all of the children having flown the nest, it is a house that needs to be lived in. So it’s wonderful that it’s open for people to come and explore Scotland. It’s in the countryside. I’m biased but the countryside is beautiful. It’s in Aberdeenshire.

Do your parents still live there?

Rose Leslie: They still live there.

What do you miss the most from home?

Rose Leslie: This is going to sound bonkers, and I kind of get a little bit of relief from New York, but the weather. I love it cold, man. It was raining today. It was really full on. I woke up this morning and I was like, “That is a proper kind of shower happening outside.” From everyone I’ve spoken to, I think L.A. needs a bit of rain is what I’ve heard.

Do you still hear “You know nothing, Jon Snow” every day?

Rose Leslie: Delightfully, I am. It’s so lovely that it is something that is adored by so many people.