When did Hollywood forget how to make comedies? Office Christmas Party is another case study in gathering a bunch of presumably funny actors and plugging them into scene after scene of improv suggestion reject scenarios. Then spending altogether too much time on a convoluted plot that should be bare minimum just to set up the jokes they never wrote. I don’t blame the actors though, because even if this was their own improvs, they’re still being directed. 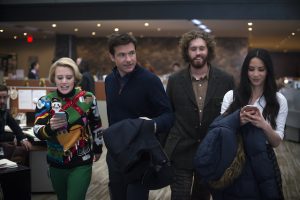 Josh (Jason Bateman) walks through his office to introduce all the characters. Mary (Kate McKinnon) is a by the books rules follower. Jeremy (Rob Corddry) is the angry guy complaining. Allison (Vanessa Bayer) is the single mom working hard while her ex brings a stripper home to their kids. Tracy (Olivia Munn) is the tech genius who talks dirty and clearly Josh has a thing for her. Clay (TJ Miller) is in charge but he’s a slacker who makes pop culture references. There’s a shy nerd who lies about his hot girlfriend, angry nerds who make fun of him, nubile cubicle women with attention drawn to their revealing clothing and all the while the jokes they’re making are not funny because they’re not about anything they’re doing or who their characters are. They’re one dimensional and they still can’t find the jokes that should be apparent.

The plot kicks in when mean CEO Carol (Jennifer Aniston) forbids them to have an office Christmas party, and drops the news that she’s cutting 40% of their staff and all bonuses. So Josh, Clay and Tracy need to sign Walter Davis (Courtney B. Vance) to make enough money to save their branch. And to win him over, they throw the office Christmas party despite Carol. This is already way too much plot for a party movie, and wait for it, there’s actually more. 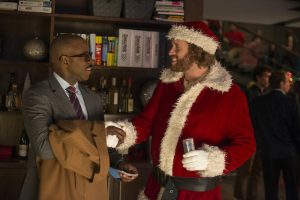 Courtney B. Vance and T.J. Miller

What happened to the good party movies, where it was just about throwing a wild party that gets out of hand and has to be repaired by the end? They’ve done it as recently as Sisters where the party escalates and farcical caricatures pay off their characters. Neighbors 2 had a party movie with feminist angle. Wedding Crashers was a good party, Animal House, Can’t Hardly Wait, House Party… Why can’t the plot just be they have to save the company from their evil boss? Or not even an evil boss, just they have to raise enough money to save the company so they hatch a crazy plan, in this case a party, to get the money they need! That used to work for Adam Sandler and Rob Schneider!

Office Christmas Party introduces a convoluted wifi technology that Tracy is inventing, which then becomes the third act device they hope will save the company. Did technology ruin comedy? Does every screenwriter think a comedy has to be the frigging matrix? Remember when saving the day just meant Tommy Boy had to sell enough brake pads? Because the brake pads weren’t actually important. It was just important to have Chris Farley fumbling around trying to sell them. Just because we’re all connected on social media now doesn’t mean your movies have to involve complicated new technology that takes 20 minutes of screen time.

There’s also a frustrating trend of filling a comedy with elaborate stunts that aren’t even funny like a basic pratfall. I can maybe see the stunts at the party, but we definitely don’t need sequences of driving stunts. Stunts are expensive and they don’t make us laugh. A good joke is cheap. Just think of funny jokes, please.

Many of the jokes are late to the party. They’re referencing things that we’ve all been talking about for months, and sometimes years already. Clay refers to the Fast and the Furious sequels. We know. We’ve seen seven of them already. Allison threatens to Gone Girl her ex, like we’ve all been saying since the book or the movie came out. They pay homage to Prince and David Bowie. It’s like all of these jokes came from Google. I feel like I’ve seen several memes about how body massagers are actually vibrators. It’s definitely not exclusive to this movie. They even brought the Iron Throne in. Sorry, when we all have Facebook avatars on the Iron Throne, it’s not funny enough to have movie characters sit on it. 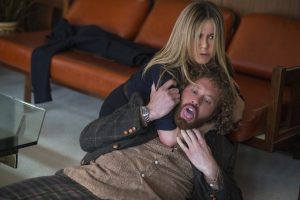 For all the introductions, Office Christmas Party is still telling us things we never saw about the characters. Near the end, we’re told Allison takes care of the whole office maternally. THAT would’ve been something to show in the first act. They say Clay is supposed to be all family oriented. Instead they showed us Clay being an ADD fuck up. They do set up that Carol knows Krav Maga so there can be another action scene with her, instead of a joke.

The party is not at all contagious. It has the worst soundtrack full of abrasive club music that wouldn’t get anyone moving. They play “Deck Da Club” twice, once in the opening titles and once during the party. I will give them the gratuitous nudity befitting an ‘80s romp, and because we’re in a post Apatow world there’s a penis along with the tits.

What makes me saddest about Office Christmas Party is that there was a glimmer of a real comedy in there, that either got abandoned or developed out of the movie. In one scene, Carol is mean to a child in an airport lounge. Make that movie! America’s sweetheart saying “f*** you” to a kid is funny. Jason Bateman drinking egg nog from an ice sculpture dick is not. 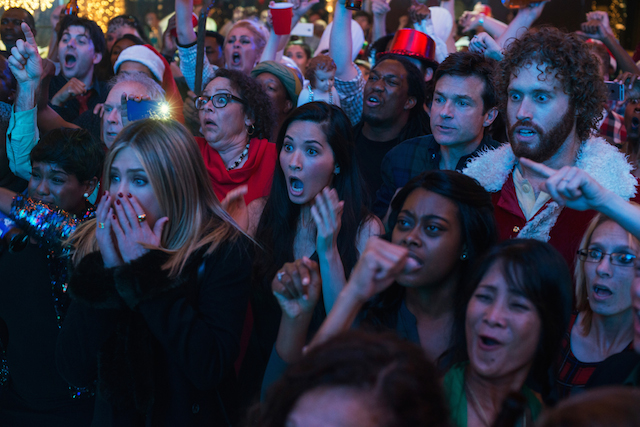 When did Hollywood forget how to make comedies? Office Christmas Party is another case study in gathering a bunch of presumably funny actors and plugging them into scene after scene of improv suggestion reject scenarios. Then spending altog...
0
Average User Rating
0 votes
Please sign in to rate.