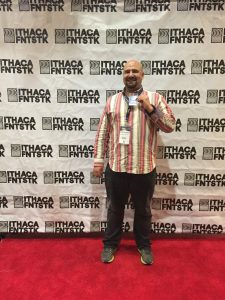 The city of Ithaca opened my cinematic world in many ways, so it was fitting that I returned as a professional journalist to cover The Ithaca Fantastik film festival. I got my degree at Ithaca College’s film school, but Ithaca is also where I discovered journalism writing for the school paper.

In 1995, living in Ithaca was the first time I had access to the indie movies I saw Siskel and Ebert discuss. Before I had to wait for them to come out on video. Ithaca had two indie theaters owned by the same family. Cinemapolis was in the basement under the Ithaca Commons. The seats were rigid and uncomfortable (somehow they shifted back and forth but did not lean) yet that’s where I saw Kids, The Usual Suspects, Bound, Life is Beautiful and more. It was also relevant to Franchise Fred since I saw the Ian McKellan Richard III (sequel to Richard II) and Othello (Shakespeare Cinematic Universe) there. Also Bound introduced the Wachowskis.

Their second location, Fall Creek Pictures, was even more endearing to me. With three screens, Fall Creek looked more like a regular movie theater with a long hallway and theater seats. Except for the third theater which was so small we used to call it the living room. I found out later it was actually a converted meat locker. Fall Creek is where I saw films like Sling Blade, Il Postino, Paradise Lost and more. I always hoped a film would play the meat locker and I got my wish with the likes of Unforgettable (Dahl not Di Novi) and Existenz. I also bought many, many posters for my dorm room when they went on sale after a film’s run. 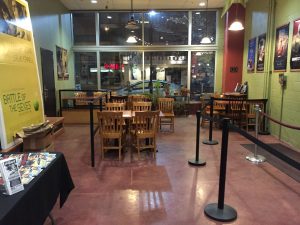 Cinemapolis has modernized to a new location on the Ithaca Commons with five screens. It’s got raised level seats but not stadium seating, a lobby with tables and chairs for pre or post film socializing, and digital projection as is the norm today. They can now keep all the films in one location and could devote two screens to Ithaca Fantastik. 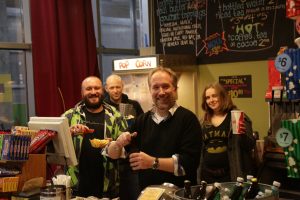 Most importantly, it still feels like Cinemapolis. The Cinemapolis franchise has grown but this isn’t the bigger, badder modern indie multiplex. It’s still run by a few recognizable locals who remember their frequent customers. They still have the best popcorn in town, with real butter and flavored powders. I think olive oil is a new addition but it adds substance to the corn.

Had there been a film festival in town in the ’90s I would have discovered even more. Now, going from film to film on the schedule is a Tuesday at my job. Ithaca Fantastik brings titles from SXSW, TIFF, Screamfest and other fests to upstate New York. Not really world premieres but imagine if you live in Ithaca, many of these movies may not even make it to theaters, even those with a Cinemapolis.

While in town I visited the Ithaca College campus. It was trippy to see students with full lives going on there. At this point Ithaca is part of the Franchise Fred origin story, but it’s still the present to them. Meeting students was inspiring and I am very hopeful for the young people coming into the industry in the next few years, and the young critics adding their voices. 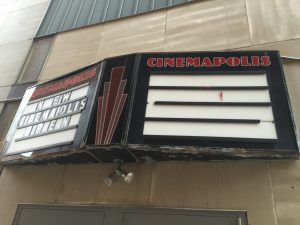 The old Cinemapolis and Fall Creek buildings are still there. IC turned the basement Cinemapolis into a studio that students can use. I attended pitch session that coincided with Ithaca Fantastik and felt all the students had great ideas worthy of making. The Fall Creek building has become a flower shop, Pilates studio and bar with live music. I miss the theaters but we’ll always have the meat locker.

Franchise Fred’s return to Ithaca was about more than just discovering new films. Franchise Fred got a chance to say goodbye to the past and meet the future of film. I hope Ithaca Fantastik continues and schedules permit me to return for the sequel.