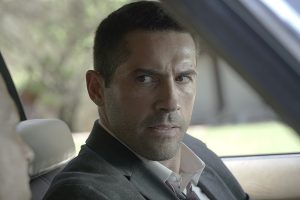 If you’re not going out to the movies this weekend, there’s a new Scott Adkins vehicle available right in your home. And man oh man, does he drive The Debt Collector.

French (Adkins) runs a dojo that’s in financial trouble. So he takes a job as a Debt Collector since he can rough up the deadbeats who don’t pay. Sue (Luis Mandylor) shows French the ropes so it’s Scott Adkins’ training Day, only it takes longer than one day. 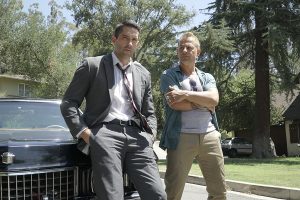 On French’s first day on job, the fights are sloppy as lowlifes flail and shoot without aim, and French is learning on the job. He doesn’t know what to expect yet. French takes a good beating too. Some of the thugs he faces are bigger than him. The debtors here big muscle to protect them, so French has to get creative to beat them.

French fights like a martial arts teacher. He’s fast and responsive, just a tad less showy than Boyka or Close Range or Ninja. He Was a paratrooper in the British army so his training is military and direct, now flamboyant. It’s still fun to watch though. It ends in a gunfight rather than fisticuffs, but what can you do? Sometimes you need to bring out the big guns.

French complains between jobs in his own accent. It’s fun to see him frazzled. Sue keeps calling him Frenchie which always makes me think “woody, I’m going to steal your girlfriend.”

Jesse V. Johnson is quickly becoming Adkins’ most lucrative collaborator. He knows how to show off Adkins’ skills in distinct ways so each film is different from the last but just as thrilling. The Debt Collector could certainly be a franchise where French and Sue collect more debts each time, but either way I’m excited to see what else this filmmaker and these performers do next.