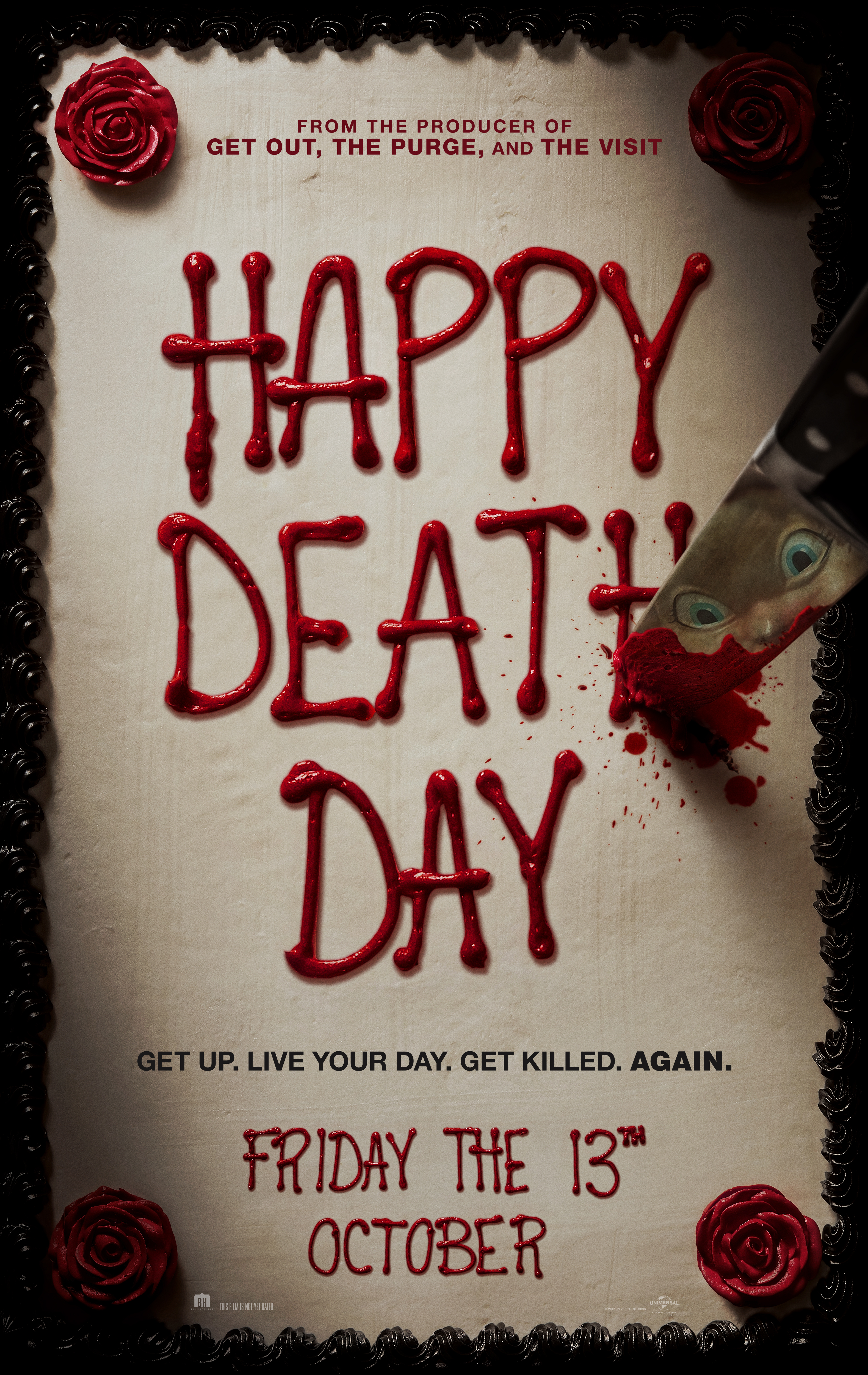 When Happy Death Day ends, you’ll want it to start all over again! Simply one of the most fun moviegoing experiences I’ve had all year, Happy Death Day is by no means a perfect film, but as far as pre-Halloween escapism goes, I invite you to turn your brain off and enjoy every second.

First and foremost, Happy Death Day has the distinction of being the only film to make me burst out laughing within its first ten seconds – well played Universal, well played. The film opens with our protagonist Tree – yes, that’s her name (a breakout performance by Jessica Rothe, MTV’s “Mary + Jane,” looking like the love child of Blake Lively and Caitlin Glass) – waking up in a dorm room, makeup smudged and a semi-circle of drool formed on the pillow. The look of hungover confusion glazed over her eyes, Tree attempts to extract herself from bed when her phone goes off with a birthday themed ringtone, and she notices she’s not alone. A boy (re)introduces himself to her as Carter (Israel Broussard, The Bling Ring), since she was pretty wasted last night and obviously does not remember, and begins polite – albeit awkward – conversation. Tree wants none of it and storms out of the dorm into the cold light of day toward her sorority house. Her walk of shame includes a number of memorable occurrences and interactions, including a tree hugger with a clipboard (Tenea Intriago, “Claws,” the equivalent of Groundhog’s Day‘s perpetually perky Ned Ryerson), Ace – a guy she’s been blowing off after a shitty first date (Caleb Spillyards, Joe Dirt 2), the queen bee-yotch of her sorority Danielle (Rachel Matthews in her scene-stealing debut), and finally her roommate Lori (Ruby Modine, “Shameless”). 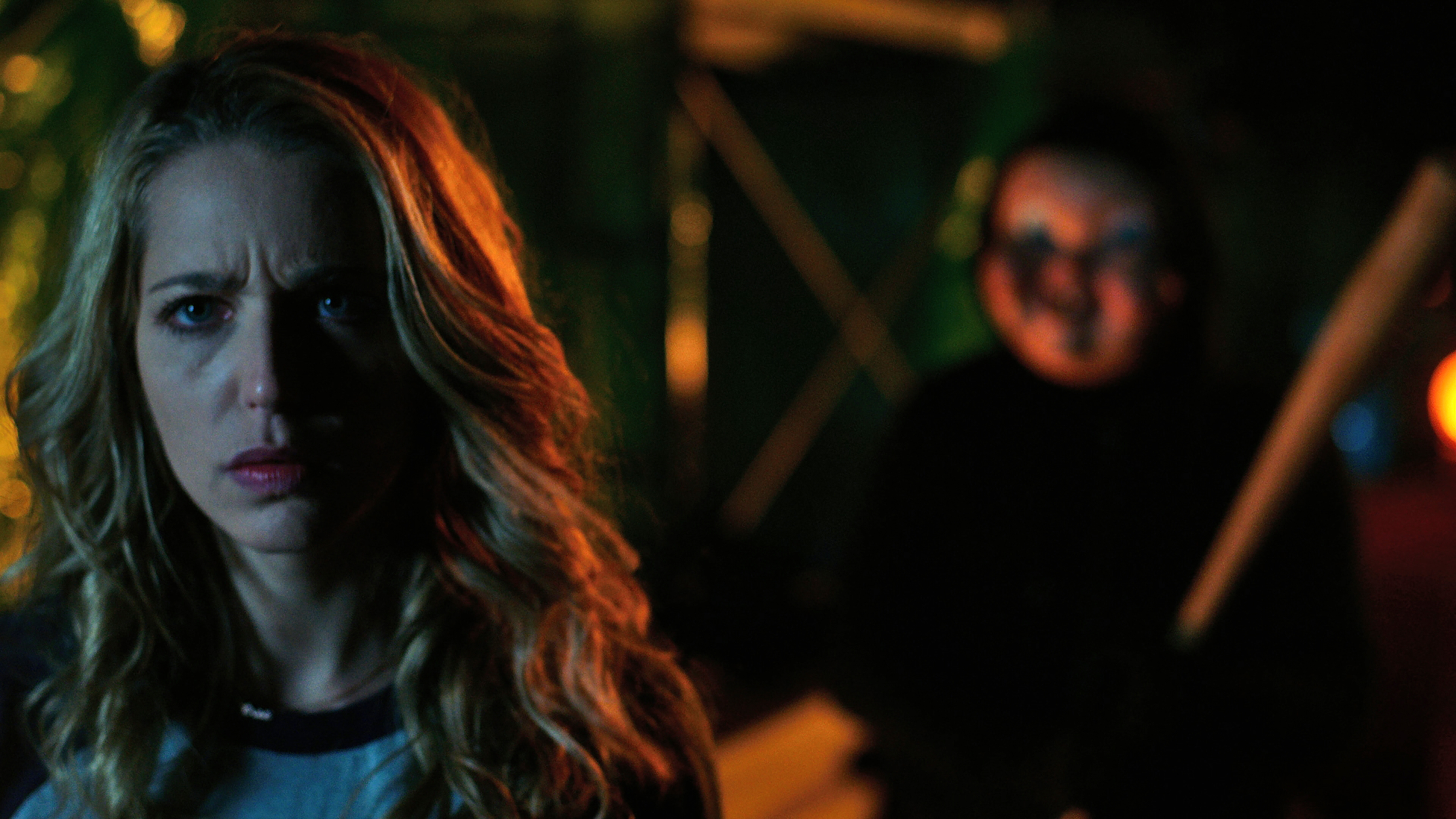 Blumhouse (“Split,” “Get Out,” “Whiplash”) produces an original and inventive rewinding thriller in “Happy Death Day,” in which a college student (JESSICA ROTHE, “La La Land”) relives the day of her murder with both its unexceptional details and terrifying end until she discovers her killer’s identity.

Tree’s roommate surprises her with a cupcake, confirming that it is, in fact, her birthday, something that Tree seems less than pleased to admit. Mid-bitching out of Lori, and before she can even try said cupcake (rude!), she realizes that she’s late for class and throws a sweatshirt on over last night’s sequin top before booking it across campus. Tree’s day continues pretty unremarkably: boring class, making out with a professor and nearly getting caught by his wife, a mean girl-esque sorority meeting (“We don’t eat breakfast!”), going to a party, and… getting murdered! Yes, no spoiler alert necessary, less than 30 minutes from meeting our heroine, she is murdered by a stranger in a black hoodie wearing a mask of her college mascot: a rather disturbing wide-eyed baby.

From here Happy Death Day kicks into gear, as Tree is forced to relive her birthday (and titular death day) again and again… and again… and again. In other hands, this film could have been a laborious mess, but director Christopher B. Landon (Scout’s Guide to the Apocalypse… which was a bit of a mess) and screenwriter Scott Lobdell (Man of the House… that Tommy Lee Jones protects a bunch of cheerleaders in witness protection film you forgot existed) both have grown exponentially from their previous cinematic endeavors to craft a film that allows deviations in its repetition to show exposition rather than telling the audience to create natural, rewarding character growth for Tree and a hell of a fun ride along the way. 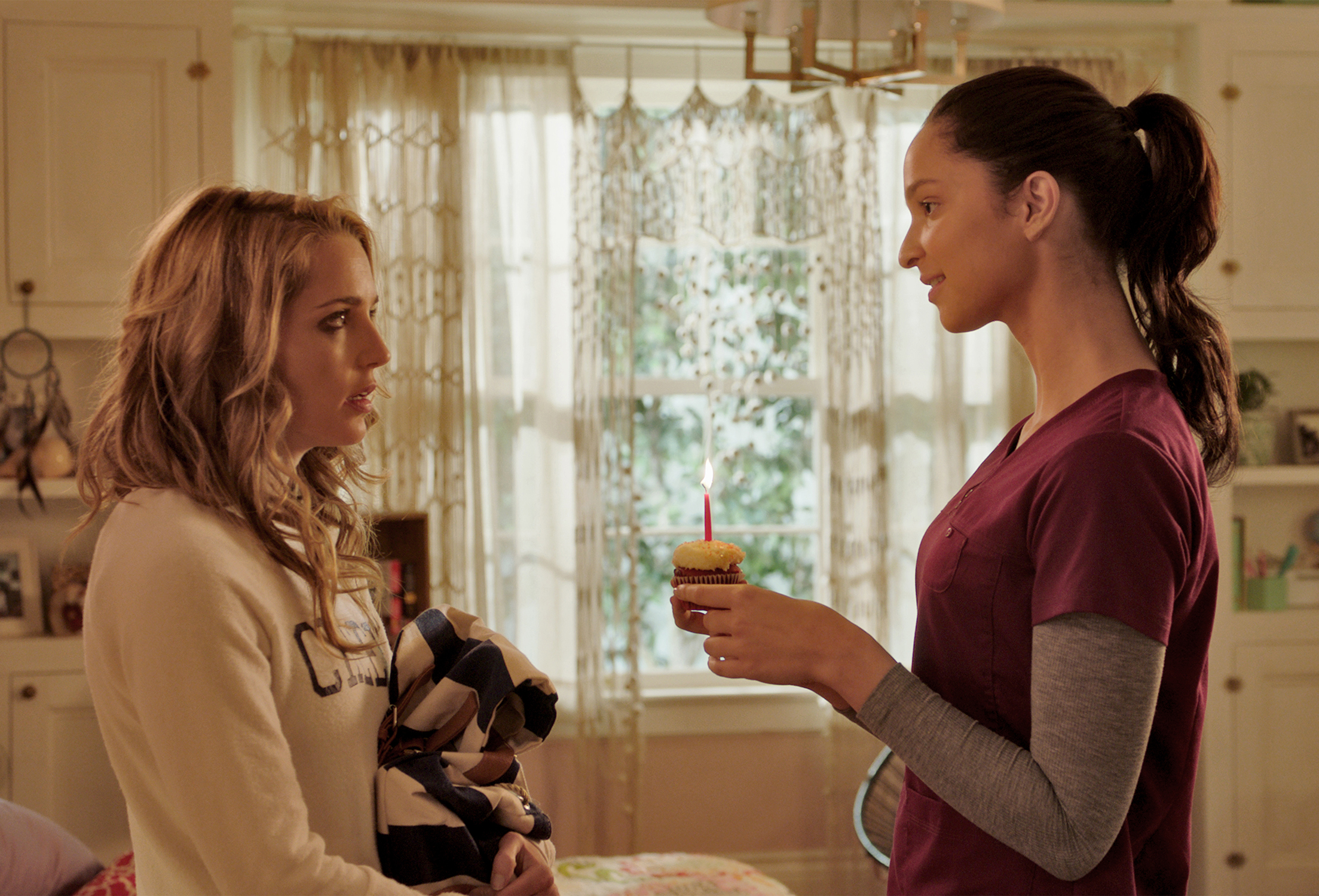 The filmmakers deserve a lot of credit for actually improving on the formula set by time-loop classics like Groundhog’s Day, by imbuing Happy Death Day with actual stakes, as each reboot leaves Tree weaker and weaker, with internal injuries affecting her and her body. Further kudos to what is my new favorite movie music montage, as Tree goes through a list of suspects of whom her killer may be, dying in increasingly ridiculous ways as our suspect list whittles down (I also love that technically she had to re-write and re-cross out the list each time offscreen). Even observant horror fans may be thrown off by the sheer volume of red herrings thrown at the viewer, but frankly, there would’ve been no perfect answer or motive as to why Tree is being murdered on her birthday (admittedly, the reveal feels far less fun than all that came before). For this reviewer, though, it was not about the destination but the journey, as Jessica Rothe (a talented actress I will now be keeping my on) elevates Tree from standard mean girl to a dynamic final girl to cheer for through a film that leans into sorority cliches and slasher expectations only to subvert them. More comedy than a horror film, with hardly any gore in sight, Happy Death Day isn’t a particularly smart film, but it’s a clever one that above all else does what movies are meant to do: entertain. In a genre riddled with sequels, remakes, and reboots, it’s refreshing to enjoy a film that is wholly original… even if it does reboot itself.

When Happy Death Day ends, you’ll want it to start all over again! Simply one of the most fun moviegoing experiences I’ve had all year, Happy Death Day is by no means a perfect film, but as far as pre-Halloween escapism goes, I invite you to turn your brain off and enjoy every second. 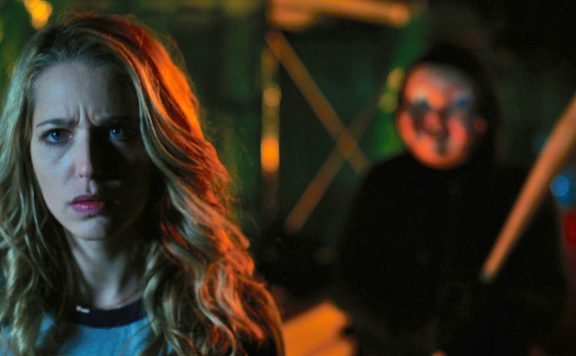