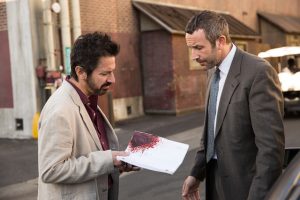 Get Shorty became a franchise the second Elmore Leonard wrote a sequel to the book, following the success of John Travolta starring in the Get Shorty film. That book, Be Cool, was also adapted into a movie starring Travolta but Epix’s Get Shorty TV series takes a different approach. Get Shorty is still about a gangster getting into Hollywood, but it’s a different gangster and a different produce.

Chris O’Dowd plays Miles Daly, a mobster from Pahrump, NV who comes to L.A. to collect a debt from a screenwriter. The screenwriter doesn’t make it, so Daly brings the script to schlock producer Rick Moreweather (Ray Romano), who sees it as a possible jump to the A-list. I spoke with O’Dowd after Epix’s Television Critics Association panels. Now renewed for a second season, catch new episodes of Get Shorty Sundays on Epix. 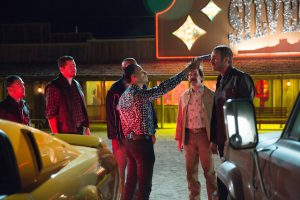 Franchise Fred: Is keeping your cool around tough guys a lot easier when you know the script works out in your favor?

Chris O’Dowd: [Laughs] In the lead up to doing the show, I decided to do some boxing because I boxed a bit as a kid but I hadn’t done it in a long time. It reminded me that when you’re with tough guys, you can tell the people who’ve been hit a lot because they’re not afraid to stand close to you. If you get hit when you’re standing close to someone, it doesn’t hurt that much because they haven’t been able to take a proper swing. So you can tell the tough guy by the closer he stands to you.That’s not to say I didn’t take a few whacks myself.

Franchise Fred: Was that part of your physicality, making sure you get close to people? 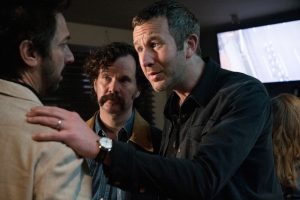 Chris O’Dowd: Yeah, it was, and being unflinching. For me, one of the challenges was being still. I’m generally, as an actor, not very much. I’m higher energy. To be still and to not be afraid to watch things unfold without being the protagonist is kind of difficult. I kind of enjoyed trying that out.

Franchise Fred: Is Miles also threatening with very innocuous gestures? Like when he swings a golf club, we know what he’s really doing. 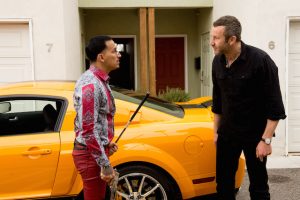 Chris O’Dowd: Somebody who is dangerous, everything they do is intimidating, I guess. The truth is, a lot of people that we talk to, like the golf guy, he doesn’t know what I do. Keeping things under wraps is interesting because you are usually intimidating to people, but to people who don’t understand what you do for a living, there’s no reason for them to be afraid.

Franchise Fred: Is the comedy in taking it seriously?

Chris O’Dowd: Yeah, I think the stakes are funny. I think there’s nothing wacky about this show. I think at times it’s hilarious, but it’s because the stakes are so high and their ability to succeed is so unlikely. Desperation is a great source of comedy. We all take it very, very seriously, at times far too seriously.

Franchise Fred: Yet there are some one-liners in Get Shorty, aren’t there?

Chris O’Dowd: Probably. There are one-liners in life, so I think it’s quite honest in that way. Most of the comedy comes out of the fact that everybody comes from very different places and they’re trying to find a home. I think it’s funny and Ray is funny in it. 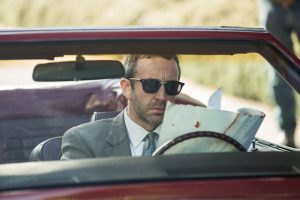 Franchise Fred: Does Miles really love the script or just the idea of having a film?

Chris O’Dowd: I think that’s a good question. I think it’s a little bit of both. We talk about that a lot. I think he is drawn to the script. Initially, it’s an Irish protagonist in this script and he’s mistreated by a British person so that draws him in, but more than anything he just wants to get something made. I think that’s a common theme in Hollywood. People will espouse the glories of a script just so they can get [a movie made]. I think we’ve probably both been on the other side of those conversations.

Franchise Fred: Have you been in meetings where someone just wants to get you attached so they can say “We have Chris O’Dowd attached?” 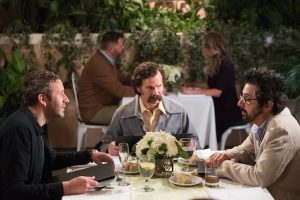 Chris O’Dowd: They promise you the world. The changing nature of a conversation that happens before you sign up and just before you start filming is always a wonder to behold. Before, they’ll promise you anything and generally it’s not stuff. It’s more like, “We’re going to do this with the character. This is going to be where this is going to happen.” Then you get to the day of the shoot and it’s like, “No, no, no, it’s the same old shit.”

Franchise Fred: Is the style of Get Shorty dialogue very natural to speak?

Chris O’Dowd: Yeah, it is. It’s punchy and it’s got that kind of Elmore Leonard feel where you kind of come in in the middle of conversations rather than it being build-ups and scenes. So it’s quite natural to play that. It’s not overly stylized. I really like the movie but it’s definitely a slicker version of the book. Ours is a little more down and dirty.

Franchise Fred: Is it very specific to the page or is there room to improv in Get Shorty episodes ? 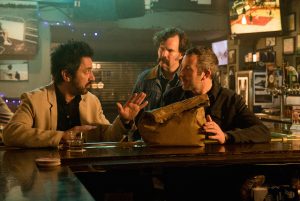 Chris O’Dowd: There is a lot of room and more and more as the show goes on, or we feel comfortable with it, the cadence of the character, I like that thing that Tarantino does where people have conversations about very mundane things in the midst of a much more serious situation, whether it’s talking about cheeseburgers or mayonnaise. We do a lot of that. There’s a scene with the head of the studio. We’re going to pitch him this script that we killed a guy to get, but all we’re talking about is, “How do they make the trees grow in this room?” They’ve got that stupid thing that all these L.A. places have where there’s an actual tree in the middle of a big white conference hall. Getting caught up with the mundanities of life is, I think, a very Elmore Leonard thing and we do it quite nicely in the show.

Franchise Fred: Had you always wanted to play a tough guy when you got into acting?

Chris O’Dowd: Not really. I think this career has brought me loads of different places. I didn’t think I’d ever play a romantic guy when I started out. I didn’t think I’d really play a tough guy. I don’t know what the fuck job I thought I was going to get. A lot of mechanics probably.

Chris O’Dowd: For sure. For a long time after that, that’s all I would get offered. I was never really that tempted but it’s kind of nice to challenge yourself to play somebody who can hurt people. I don’t know if I’ll go full Liam Neeson on ‘em.

Franchise Fred: Is the Cloverfield movie more of a horror role?

Chris O’Dowd: No, it’s not really a horror movie. It’s more like a space movie. We’ve shot it. It’s good.

Franchise Fred: Is it on a spaceship in zero gravity?

Chris O’Dowd: I don’t know how much I can say. I will say that it’s set in space.

Franchise Fred: Was it fun to shoot on studio lots as the movie studios in Get Shorty? 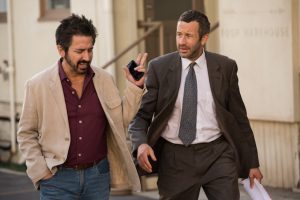 Chris O’Dowd: Yeah, it really was. We shot at Paramount, Sony and it’s odd but I’ve worked there a good bit and you never see cameras because they’re always these massive buildings with the names of better movies than you are shooting written on them. “This is where they shot <em>Rear Window</em>.” It’s one of the things I do love about the studios in L.A. They’ve got those things, “This movie shot on this soundstage.” I love the sense of history but also it’s terribly intimidating. It’s like “Here is a list of movies that are better than what you’re shooting. Good luck.”

Franchise Fred: Is the studio executive a love interest for Miles?

Chris O’Dowd: She’s definitely going to be a very pivotal character in our story. They will make each other’s lives very messy. 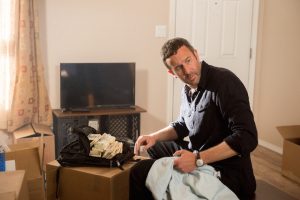 Franchise Fred: Is Miles still trying to get his wife back?

Chris O’Dowd: Yeah, throughout. He has successes and failures. I guess the question that we end up leaving the season with is: he’s been saying all along that he is doing this to win his wife back. Then he gets her and keeps going. We almost ask the question, was this about her or is this about you? That’s probably the question that’ll bring us into season two because he can pretty quickly jettison his entire life just to get success, just like everybody in Hollywood does.

Franchise Fred: Does his daughter get a chance to act? 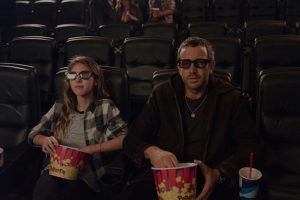 Chris O’Dowd: Yes, he gives his daughter a small part in the movie. It’s difficult so he has to strong arm somebody a little bit to get her in. He gets her some acting lessons, has some difficulty with the acting coach in L.A. that he also has to have a little talk with, but of course she then sees him as a hero. And then, of course it’s opening a can of worms. Do I want my daughter to be an actress in L.A.? What a horrible poison to give somebody.

Franchise Fred: That was my first thought but he doesn’t know what he’s getting her into, does he?

Chris O’Dowd: That’s right. The truth is, that’s the case throughout the entire show. He just doesn’t know what he’s getting himself into. This is not a well-trodden road for people like him.