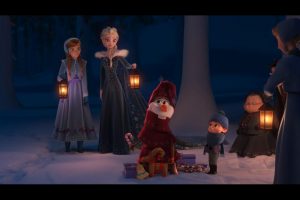 If Frozen Fever wasn’t enough to tide you over to Frozen 2, Olaf’s Frozen Adventure should do the trick. The 22-minute short will play before Coco and it is substantial enough to address the themes of the landmark animated feature. Plus, it’s a Christmas classic that could become a perennial. Like Die Hard.

Anna (Kristen Bell) and Elsa (Idina Menzel) prepare for the Yule bell ceremony which hasn’t happened since their parents died. Their excitement to celebrate with the town is short-lived as all the citizens go right home to celebrate their individual family traditions. I gather they all developed their own traditions in the absence of a town tradition for decades but I may be reading more into that than intended. What’s everyone supposed to do while Elsa is in isolation, not celebrate Christmas? Of course they came up with their own. 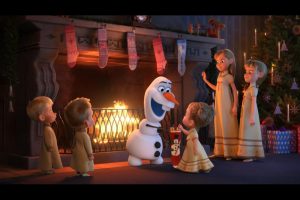 What is sure is that Anna and Elsa missed out on having a Christmas tradition while Elsa was in isolation. Olaf (Josh Gad) tries to fix this in a perfectly misguided sidekick way. He goes around town collecting everyone’s traditions to bring back to them. The moral of Olaf’s Frozen Adventure is positive. The importance of tradition is not the superficial trappings of it, although Olaf makes an astute point about hanging stockings over a fire hazard. But traditions are important because of with whom you share them. 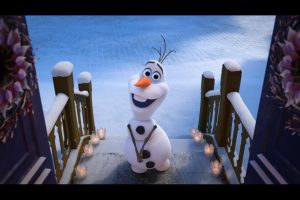 It’s relevant that the holiday brings up some old wounds that haven’t all healed. Anna and Elsa reunited in Frozen but they’ve still missed out on a lot of time together. This is a nice way to acknowledge there’s still room for more healing. In addition to connecting to Elsa’s time in exile, the story connects to “Do You Want to Build a Snowman” in a satisfying way too.

The four new songs of Olaf’s Frozen Adventure come fast in the first act. There’s no “Let It Go.” They’re surely saving that for the feature sequel but the Yule Bell song is a catchy chorus a la “Belle” from Beauty and the Beast. Kristoff (Jonathan Groff)’s “Ballad of Flemingrod” is a funny solo about a gross troll. Olaf sings “That Time of Year” and “When We’re Together” is another good sister song. Two songs reprise at the end so there is a consistent bookend of music and touch on the same memory of sisterly activities that the movie’s songs do. 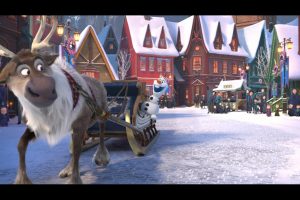 While Olaf explores all the holiday traditions, there is some funny commentary on the commercialized holidays. It’s all in the spirit of Frozen, twisting the traditional. The movie twisted the traditional Disney Princesses and this twists Christmas specials. There is an interlude animated via a knit scarf that’s really beautiful.

It’s great that Olaf’s Frozen Adventure is going theatrical. It can surely play on TV every year too, but who are we kidding? It’ll sell its own DVDs every Christmas, but the first viewing will be this year with Coco. 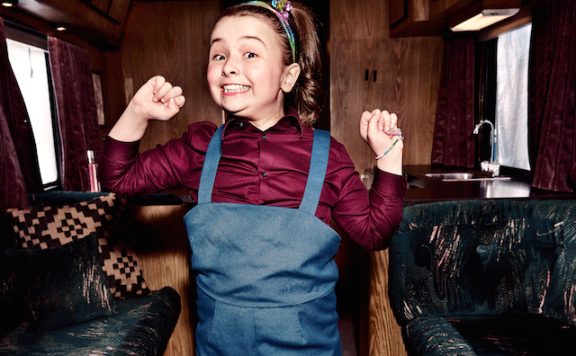