Pacific Rim Uprising is the kind of sequel that puts Franchise Fred to the test. I say every movie ever made should have a sequel, no exceptions. That means even sequels to movies I don’t like. In the cases of Paranormal Activity and The Blair Witch Project I felt the sequels were more interesting because of the way they built on the history of their predecessors, even if I didn’t like the original. 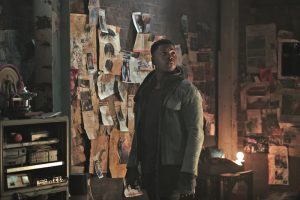 (L to R) JOHN BOYEGA as Jake and SCOTT EASTWOOD as Lambert in the Gipsy Avenger Conn-Pod in “Pacific Rim Uprising.”

Uprising is also still saddled with the mechanics established in Pacific Rim. They still have to find two pilots who link up with a neural handshake, and that means they’re still cutting back and forth from the battle to inside the cockpit. The editing is a little smoother this time, and setting many of the battles in broad daylight helps tremendously.

The only memorable battle in Pacific Rim was the Hong Kong fight with bright neon where the hulking opponents threw boats at each other. At least each of the battles in Uprising has something going for it, be it an Siberian ice fight or a battle royale against three Kaiju. They travel the world to set each battle in a different international city too.

This is a Jaeger heavy sequel. It really makes you wait to see the Kaiju, so I hope you like the Jaegers. I might complain that it really shortchanged the Kaiju, but the robot on robot battles were more interesting than the Jaeger on Kaiju so I preferred it.

Jake Pentecost (John Boyega) makes a fine protagonist. He’s got the generic action hero traits of loner who doesn’t respect authority and lives under his father’s shadow. The squad of teenager Jaeger pilots in training is a smart way to broaden the appeal, especially with young viewers who’d want to relate to the heroic pilots on screen. They’re all one note caricatures, but welcome to Hollywood, kids! At least they’re diverse kids. 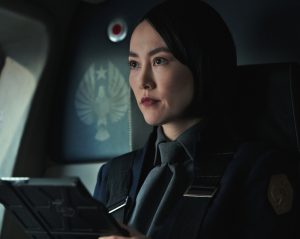 Amara (Cailee Spaeny) gets the closest to a whole character, or at least what Pacific Rim considers a character. She’s a resourceful, innovative girl who built her own Jaeger, so yeah, the precocious kid. That’s more than some returning cast get. I didn’t even know they were bringing back Oscar nominee Rinko Kikuchi as Mako, and I don’t think the movie knew either because they didn’t know what to do with her.

When Amara arrives at the training facility, she starts naming all of the Jaegers as if we’re supposed to remember them. It’s funny, a big criticism of the first movie was how indistinct all the Jaegers and Kaiju were. So they not only made a point of blatantly saying, “Here are all of their names,” they also sort of doubled down on, “Of course you remember these Jaegers, don’t you? Aren’t you happy to see them again?”

Pacific Rim: Uprising ends with a tease for Pacific Rim 3. That’s real balls, considering they were lucky to get a part two. Franchise Fred has to admire the conviction there, but perhaps an amendment to my policy is in order. Every movie should have a sequel, but then if the second one’s no good you really have to stop.