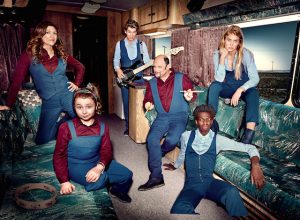 Jason Alexander created a new show for Audience Network. The Swallows are a traveling family of musicians but they ain’t The Partridge Family. As if the name wasn’t a double entendre enough, The Swallows have R-rated adventures in the new comedy Hit the Road. We met the youngest member of the Swallow family at TCA. Maddie Dixon-Poirier plays Casey and she told us about playing music and riding the tour bus, along with her personal experience as a young actor. Hit The Road premieres Tuesday, October 17 on Audience Network.

WLE: What instrument does your character play?

Maddie Dixon-Poirier: My character is Casey Swallow and she is a hippie that likes causes and stuff. She’s like a hippie Greenpace type person, and she’s the glue that keeps the Swallow family together. She sings and she plays the keyboard.

WLE: Did you learn how to play keyboard?

Maddie Dixon-Poirier: No, I actually faked it. [Laughs]

WLE: Do you get to sing the songs?

Maddie Dixon-Poirier: Yes, I do. We had a recording session before we filmed and it was so much fun.

WLE: What are your favorite songs from Hit the Road?

Maddie Dixon-Poirier: There is “Family Band” which is my favorite ever. That will have to be my top.

WLE: How did you get this role on Hit the Road?

Maddie Dixon-Poirier: It was titled Untitled Jason Alexander Project. They hadn’t named it yet and I put in a self tape. They liked it so they wanted me to meet the director and I did. I got it.

WLE: How long have you been acting?

WLE: When did you know this was something you wanted to do?

WLE: What musical did you do on stage?

Maddie Dixon-Poirier: I just started doing theater camps and stuff. I did star in this spinoff show, it’s called Dreams of Broadway.

WLE: What are your favorite musicals and songs from them?

WLE: Do you think you’re going to want to continue acting as an adult?

Maddie Dixon-Poirier: Oh, definitely, of course. I really want to do acting forever.

WLE: Are you in school right now?

Maddie Dixon-Poirier: No, I just got out of school and I’m home schooled.

WLE: Do you have lots of friends who know you act?

Maddie Dixon-Poirier: Yeah, I do. I have quite a few friends that know about it and they’re like, “Oh my gosh, you’re an actor. Now I want to be your friend.” I got some friends that go way back before they even knew I was acting so those are the true friends.

WLE: Those are the friends you want to have. Do you ever want to go to a regular school?

Maddie Dixon-Poirier: Not really, no. I find there’s too much drama there and I feel like it’s just more learning based than anything else.

WLE: That’s true. Hit the Road looks fairly raunchy. Do they do the naughty stuff around you?

Maddie Dixon-Poirier: No, actually 90% of the stuff that is very adult, they don’t have me on set so I’m not supposed to watch.

WLE: When you have to do your part of the scene, do they explain what’s happening?

Maddie Dixon-Poirier: Yeah, me and my mom talk about it before.

WLE: When they send you the scripts, do they white out the adult parts?

Maddie Dixon-Poirier: No, actually. They just keep it all in and me and my mom talk about it. Jason is very open about taking out any stuff that is raunchier than me and my mom want or having to remove me from scenes that they don’t want me to be int. 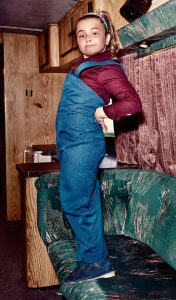 WLE: How cool is the bus?

Maddie Dixon-Poirier: Oh, the bus’s name was Boomer originally. My first impression was it smelled really bad. It smelled very bad in there and it looks way bigger on camera than it actually is. It’s quite a small space but our cameramen worked around it so well.

WLE: Have you ever been on road trips with your family?

Maddie Dixon-Poirier: No, no, we’re not a road trip family. We’re more like a stay at home, sit and do nothing family.

WLE: What do you think of the Swallows’ costumes?

Maddie Dixon-Poirier: They give you a lot of wedgies, a lot. They’re interesting. They’re very interesting, I’ve got to say. They’re like these blue one piece jumpsuits. My dress shirt was way too short so it would always ride up and it was so annoying. I don’t really miss those but I miss the rest.

WLE: Did you do a lot of movies before Hit the Road started too?

Maddie Dixon-Poirier: I did do a few but nothing as cool as this.

WLE: What else should we look for you in?

Maddie Dixon-Poirier: I’m actually in a show called Hell on Wheels season five. I’m in episode one. I don’t have anything upcoming.

WLE: Did you ever watch Seinfeld?

Maddie Dixon-Poirier: I did actually. I watched a little bit to get to know Jason and what he did, to know what type of work he did. Just to get the tone of the show and the tone of how the show might work.

WLE: What was your favorite Seinfeld episode?

Maddie Dixon-Poirier: I don’t really have one. They’re all pretty good, I’ve got to say.