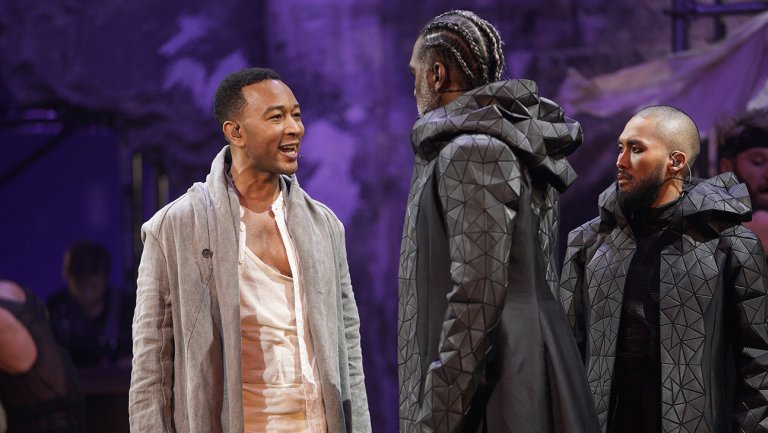 I’ll be honest. I wasn’t even planning on tuning into the live event. I’m definitely not an avid musical follower, and the other live NBC musicals, like Hairspray and The Sound of Music, didn’t hold much interest to me. Let’s just say, I wasn’t setting my Easter festivities around watching Jesus Christ Superstar. Except, something intrigued me about it because I’ve actually always loved the music and songs in Andrew Lloyd Webber and Tim Rice’s rock opera. It’s nostalgic for me, having an older sister who played the soundtrack to the 1973 movie over and over again and watching Norman Jewison’s hippy and groovin’ film many times.

So, I turned it on just to see how popular singers like John Legend as the titular character and Sara Bareilles as Mary Magdalene would handle the material – and was immediately drawn in.

First of all, the look of it was pretty mind-blowing. Unlike the previous NBC live musical events, Jesus Christ Superstar was performed as a real live concert, housed in the enormous Marcy Avenue Armory in Williamsburg, Brooklyn. The set was minimal but modern and industrial, complete with scaffolding, large blocks placed around, and one giant mural wall on the side.

In the opening number, the punked-up cast and musicians move around the stage at will, including an-all female string quartet and guitarists jamming on stage. One of the Apostles. Simon (Erik Grönwall), spray paints the word “Jesus” on the wall, and soon it parts to reveal Legend as Jesus, walking in to greet his followers. I was totally hooked from that moment.

The story, which Webber and Rice wrote in 1970 and turned into a Broadway musical in 1971, centers on the last week in Jesus’ life, from when he comes to Jerusalem with his many disciples to his inevitable crucifixion. It also depicts the conflicts Jesus has with his trusted friend, Judas, who tries to warn him but eventually becomes the tragic figure in betraying Jesus.

Legend was damn near perfect as Jesus. We’ve all heard him sing and know he has the vocal chops, but I didn’t realize the range he has. He hit notes in this that were astounding and also handled the emotional and painful moments with aplomb. His final crucifixion death scene left not a dry eye, as the cross was raised higher and higher; it was a powerful moment.

But ultimately, Jesus Christ Superstar really belongs to Judas, whose gut-wrenching inner conflict spills all over the stage. You need a powerful voice in the role to make it work, and casting Hamilton‘s Brandon Victor Dixon was a stroke of genius. This guy’s performance was unstoppable and you couldn’t take your eyes off of him. I was so moved in parts, especially with his song “Damned For All Time/Blood Money,” with the Jewish priests, who looked so menacing in their Matrix-esque garb. And Dixon’s final performance “Superstar” just brought down the freaking house.

As for the other cast, everyone was on their A-game. Bareilles wasn’t necessarily as dynamic as her fellow cast mates, but her sweet vocals added such soulfulness to songs like “Everything’s Alright” and “I Don’t Know How to Love Him.” Then there was Alice Cooper as King Herod, singing the rock opera’s comic relief song. Josh Mostel played it mostly for laughs in the 1973 movie, but in this, the legendary rocker showed up with his signature look, the dark eye makeup and wild hair. While he didn’t move around a lot (he had some fun backup dancers around him instead), Cooper did what he does best and reveled in egging on the audience for applause. Nice little moment for him.

Honestly, just everything about this production was cool and lean and relatable. NBC really hit it out of the park with Jesus Christ Superstar, and it might be hard to top the sheer power in any of the follow-up live musicals they do.