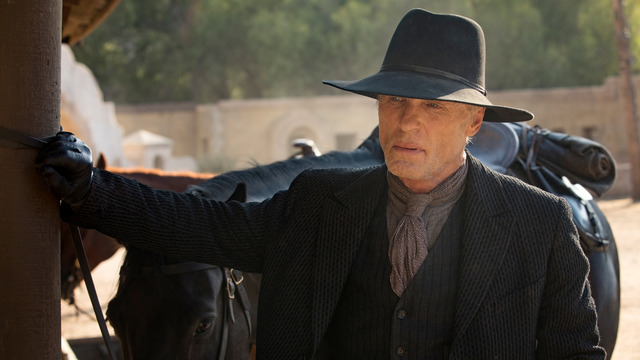 Sunday night’s episode of Westworld was a mind-bender, but in it, we got a few more pieces to the puzzle to William, Delos Inc. – and even Robert Ford.

— The episode opens with a sterile looking apartment that looks underground (it is). In it is James Delos, as he goes through a series of mundane things like a workout, masturbation – and making coffee. Except he misses the coffee cup when he pours the cream. That’s your first indication something isn’t quite right. Then William shows up with whiskey. “If you aim to cheat the devil, you owe him an offering,” says James as a toast. His son-in-law tells James he is in an observation room and needs to answer a few questions, to lay some groundwork for “fidelity.” James is impatient to get out, but William shows him a piece of paper. James seems shocked to read it.

— Cut to older William/Man in Black, who’s riding with Lawrence. They come upon Chinese hosts “building” the railroad – and using human bodies as the planks. Eek. MIB and Lawrence end up reaching Lawrence’s Mexican village, but Major Braddock and his men are already there – and it’s not good.

— Meanwhile, Clem (who has to be controlled somehow by Ford) drags Bernard to a cave and unties him and then leaves him there with a gun. Guess who’s in the cave? Elsie! Yep, she’s still alive and was put there by Bernard back when Ford was controlling him. She naturally doesn’t trust Bernard after he chocked her out and left her there. But Bernard tells her what’s been happening, as he starts to fail in front of her. She seems a bit surprised to find out he is actually a host. He needs her to help him try to stabilize and find cortical fluid to restore Bernard. 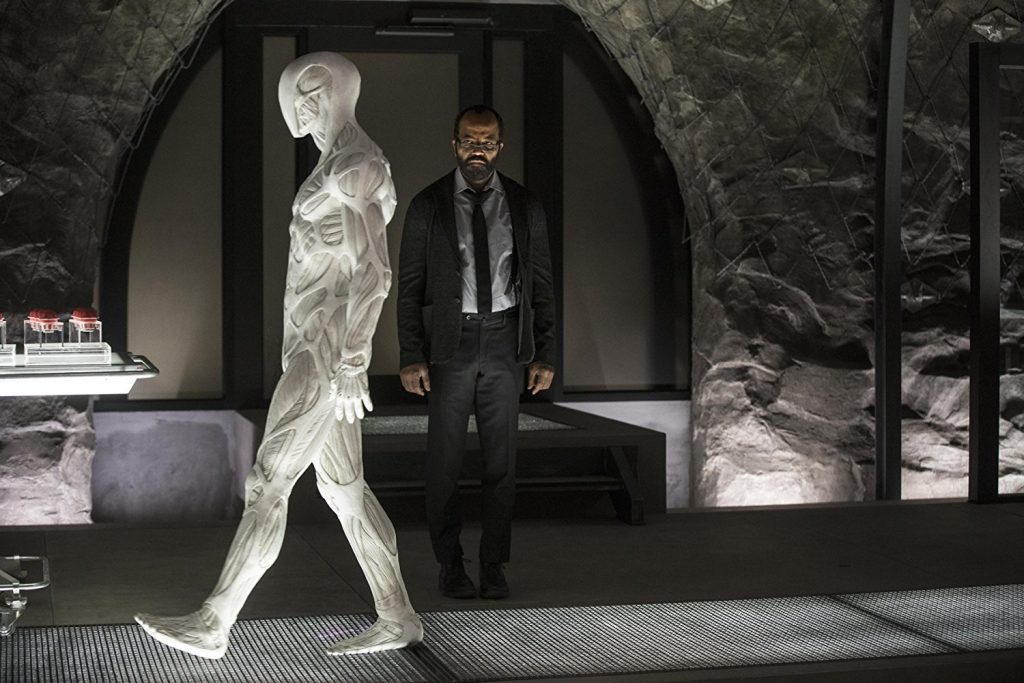 Turns out, there’s a hidden elevator in the cave that leads them to Sector 12, a secret lab. When they go down, they see it’s a bloodbath, with dead technicians everywhere. There is one weird white drone host left, but Elsie kills it. Bernard is in serious trouble, and Elsie decides she’ll help him and gives him cortical fluid. She also explains what is happening to Bernard, that his memories are jumbled and in pieces; he can remember things in real time but not everything. More on the lab in a minute.

— We see Grace and Ashley captured by the Ghost Nation. He tells her he can probably manage to get them out – but she says she doesn’t want to leave the park. Grace eventually makes a break for it and escapes.

— Back to Papa Delos, same place, same routine. Yes, he is a “host” now that somehow has Delos’ consciousness implanted in it. When William visits again, slightly older, he seems to be hoping James might make it, but he’s not ready yet. William tells James that it’s been seven years since the real James died. He also tells him his wife has died of a stroke, but his daughter and granddaughter are doing well. William walks out and we now see that James is in a cell. He tells the tech to terminate the “experiment.” She freezes James’ motor capabilities and then torches the place. Seems like a pretty expensive experiment to have to rebuild each time. 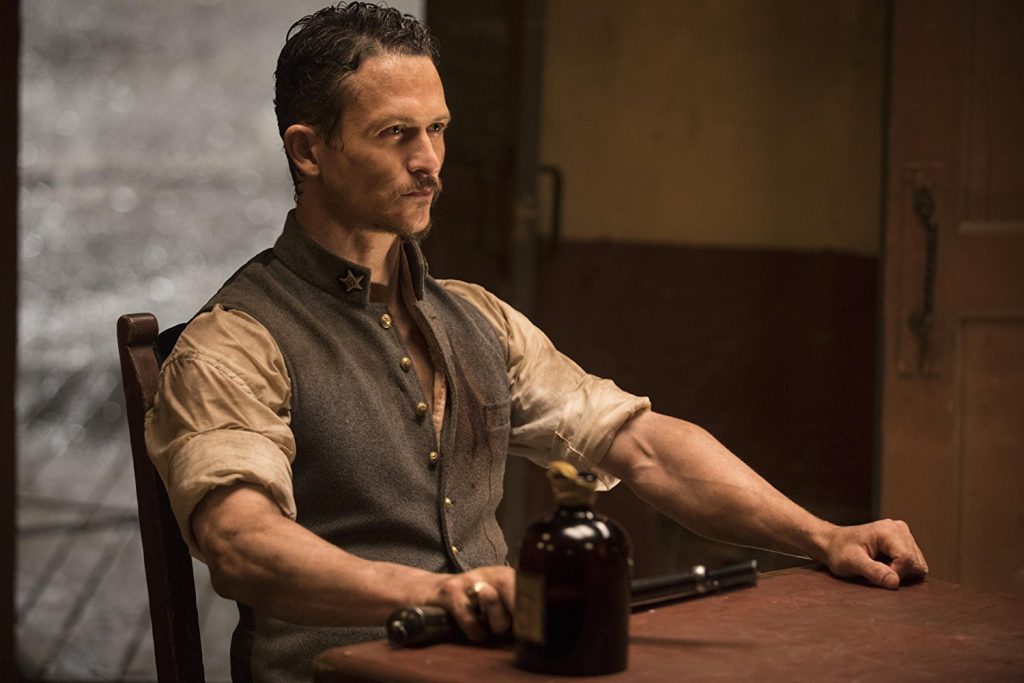 — Jump to the Man in Black who ends up saving most of the townspeople in the village from Braddock and his men. It’s a change of pace for the MIB since it’s usually him doing the killing, but it’s still not enough to redeem himself. Lawrence’s creepy daughter speaks to him as Ford, telling him one good deed can’t wash away all the bad MIB has done. The game is still on.

–That brings us to the last encounter in the cell with James Delos. Apparently, this experiment has lasted the longest, but the host Papa Delos is still failing. He is visited now by older William/MIB who tells him this has been the 149th time they’ve recreated him, but they can’t quite make it the consciousness meld with the mechanical body. MIB also delivers the bad news that his daughter has killed herself and that his son, Logan, has overdosed. James starts glitching up a storm. MIB leaves and tells a new technician to let the Delos host live awhile longer, to monitor how the degradation progresses.

— And then we finally find out the real purpose of the lab. Bernard knows he has been there before but isn’t quite sure why. He and Elsie end up discovering James Delos’ cell, in which Delos is actually still functioning. Sort of. He has destroyed the place, cut up his face with glass – and even killed the young technician. In essence, he has turned into that devil and this is his hell. He comes after Elsie and Bernard but they stop him – and Elsie torches him and the entire cell once and for all.

— So, all this triggers Bernard’s memories. He was helping Ford build actual human consciousnesses to implant into hosts. Turning them into little red balls of brain nerves much like the programmed white ones that go into regular hosts. Bernard remembers being in the lab for the last time, probably right before Ford’s tragic dinner party, and taking one of those red balls. Then he tells the drone hosts to kill everyone in the lab – and then destroy themselves.

Bernard snaps out of the memory and assures Elsie he won’t hurt her again as they go off to figure out what to do next. He seems to believe he won’t hurt her, but who knows? More importantly, whose consciousness does he have in his pocket? The most likely answer is it’s Ford, but we’ll see.

— The last moment of the episode, though, I guessed earlier on. As MIB, Lawrence and few of the Mexican villagers are riding out, there comes a lone figure on horseback riding towards them: It’s Grace, whose real name is Emily. “Hi, Dad,” she says to the Man in Black. Aha! 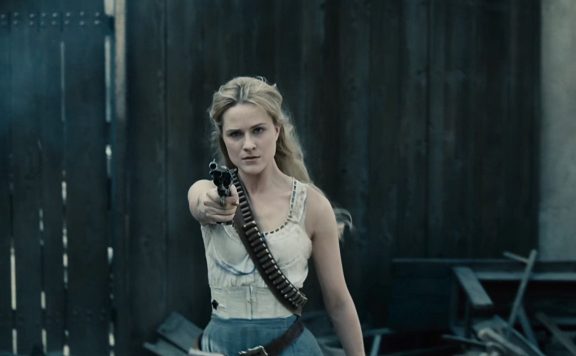 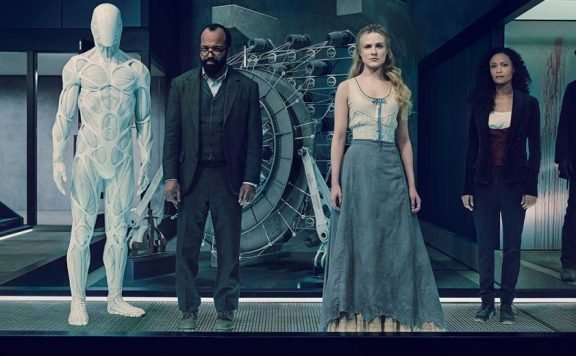 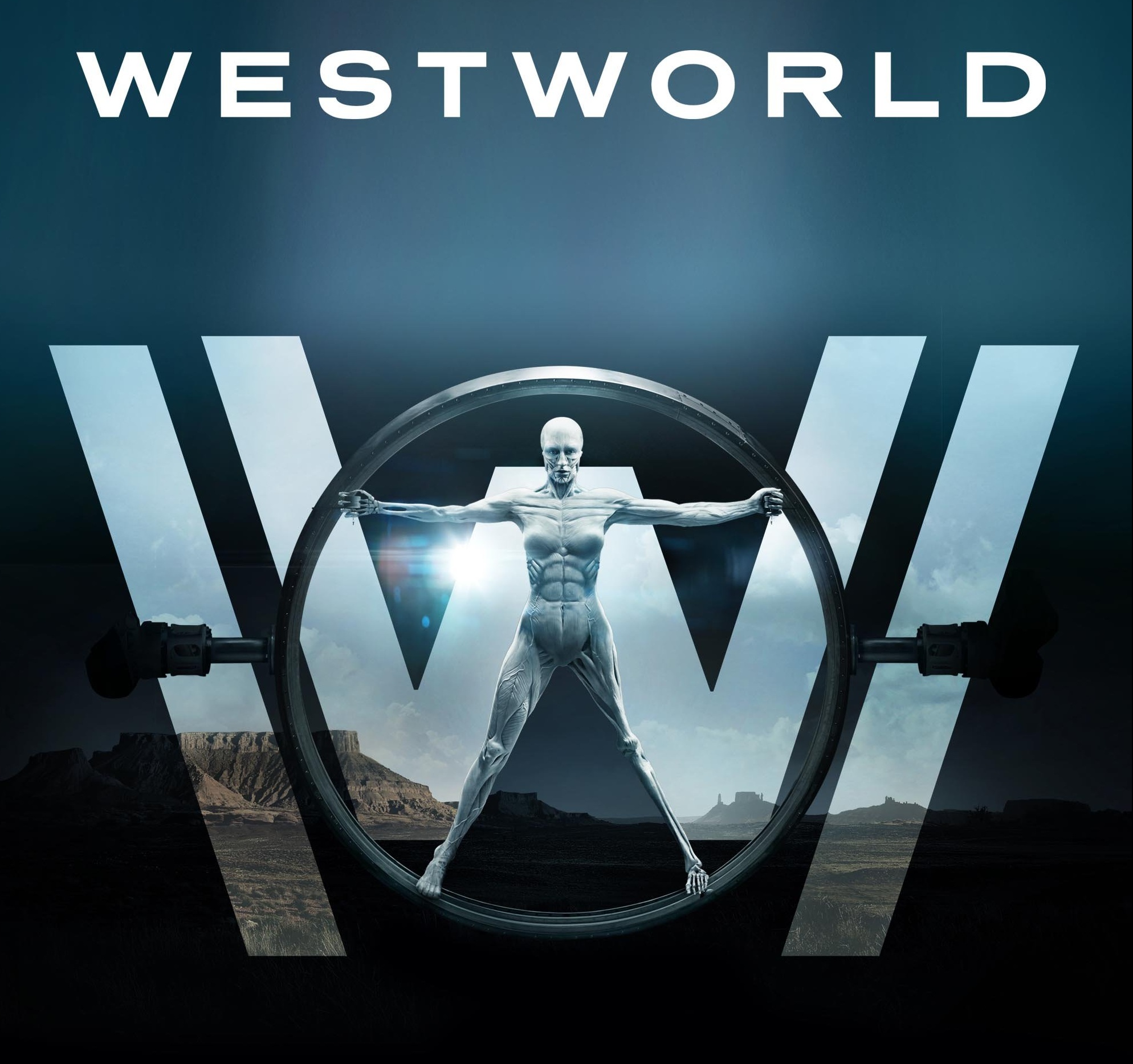 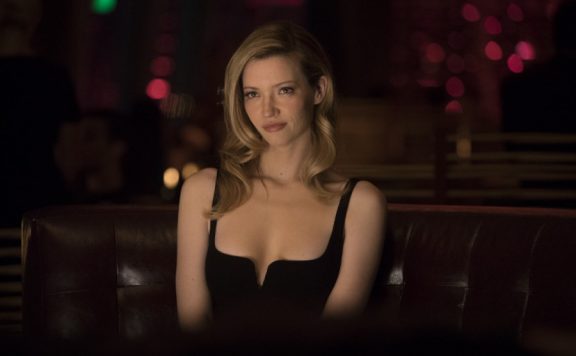 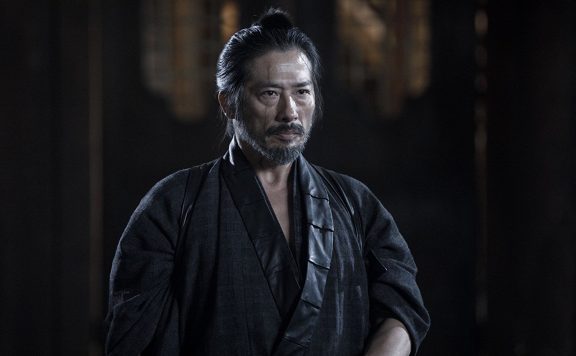 ‘Westworld’ Recap: The Question of Immortality

Sunday night's episode of Westworld was a mind-bender, but in it, we got a few more pieces to the puzzle to William, Delos Inc. – and even Robert Ford. Here's what happened [SPOILERS AHEAD!]: -- The episode opens with a sterile lo...
0
Average User Rating
0 votes
Please sign in to rate.