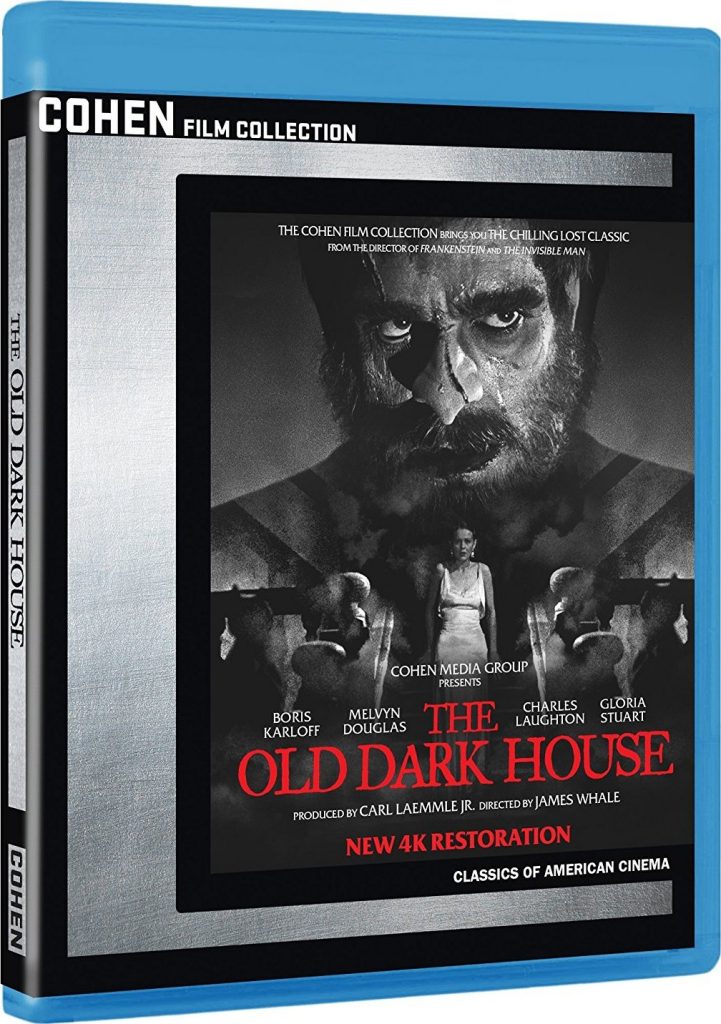 I’ve discussed my love for the classic Universal Horror films many times before, but Director James Whales’ films in particular hold a special place in my heart. I will admit that I didn’t come to realize nor understand the filmmaker’s personal journey and story until many years after I had already seen the majority of his films as a child. It wasn’t until Director Bill Condon’s 1998 film Gods and Monsters starring Sir Ian McKellan as Whale, that I become fascinated with the man’s life, and subsequently went back and re-watched all of his classic films including the original Frankenstein, Bride of Frankenstein, The Invisible Man, and The Old Dark House. Whale was absolute original in his field; crafting cinematic horror stories with a gothic style and wicked sense of humor unlike any other filmmaker in his time. With this new Blu-Ray edition of The Old Dark House from Cohen Media Group, viewers can appreciate his genius all over again in a beautiful new restoration.

The Old Dark House begins with a group of travelers becoming stranded somewhere in the Welsh mountains when their automobile is unable to pass through a rural road blocked by a landslide on a dark and stormy night. The group includes married couple Philip and Margaret Waverton (Raymond Massey & Gloria Stuart) along with their friend Roger Penderel (Melvyn Douglas). As the trio descends upon the nearest titular mansion residence, they are greeted at the door by the hulking, disfigured butler Morgan (Boris Karloff). Once inside, they are immediately thrust into the strange lives of the homeowners; Horace Femm (Ernest Thesiger) and his sister Rebecca (Eva Moore). Drudging up their troubled and possibly unlawful past, awkwardly arguing in front of their stranded houseguests, and not being able to control the inevitably drunken butler Morgan’s shenanigans are just a few of the bizarre antics that lead up to a memorable finale in this wickedly delightful classic.

Produced by Carl Laemmle Jr., and directed by James Whale, The Old Dark House remains a true Horror classic, even after all these years. It’s also a very subtly humorous film, retaining the dark comedy present in other James Whale films. The sarcasm in the writing is outstanding and still elicits giggles. The interplay between Horace and Rebecca, in particular, is a standout. Viewers will appreciate the slow-build chaos as each subsequent member of the Femm family is seemingly unearthed and our houseguests become increasingly horrified throughout a night they’ll not soon forget.

This new 4K restoration is nothing short of a revelation! The black and white cinematography is simply stunning to behold in high definition; the end result of a restoration effort that began many years ago with Curtis Harrington’s dedication and passion for the film and ends with this glorious 4K master brought to us by Cohen Media Group (I’ll have more on Mr. Harrington’s efforts below in the special features section). The print is astonishingly clean for a film made in 1932; something that is no doubt the product of countless hours of restoration work to bring every detail of James Whale’s masterpiece to life for the format. Fine detail is crisp and clean, with definition so vivid in some scenes, it’ll have film buff’s picking their jaws up off the floor. Pay close attention to the small details here like the pores and facial hair on Karloff’s face; the wrinkles and rain slicked fabric on the stranded party’s trench coats in the opening scenes, and the nearly tangible texture inside the house itself. Black levels look inky and authentic too!

The included 2.0 PCM audio track is another highlight of this release, offering up a front heavy and authentic home viewing experience with dialogue that comes through clean and clear, and a musical score and background effects that sound crisp all around! I was surprised at how immersive this track was and combined with the beautiful picture quality, makes for a delightful complete package.

Cohen Media Group has given fans of The Old Dark House the definitive home video release with exciting special features that delve deep into the making of this classic Horror film. Here’s what’s included on this Blu-Ray edition:

This Blu-Ray release from Cohen Media Group features beautiful black and white artwork on the cover highlighting Karloff’s iconic gaze looming over Gloria Stuart. The basic design of the packaging mirrors other Cohen Media releases with its gray border scheme in the “C” outline. The back of the case includes a brief plot synopsis, a handful of reviews and accolades, and a list of bonus features and technical specifications. Inside you’ll find the Blu-Ray disc with Karloff’s face on the disc art as well as a quality booklet featuring production stills and excerpts from “Curtis Harrington on James Whale: An Interview with David Del Valle.” David is one of my personal favorite commentators and he asks some very intriguing questions in this interview that sparks a lively discussion between the two. I always appreciate when a distributor goes above and beyond to include a booklet with a home video release, and the artwork combined with Del Valle’s interview is a perfect addition! Finally, visible through the transparent Blu-Ray case is a production still showcasing a struggle between Karloff and Stuart.

The Old Dark House remains of the finest Horror films ever to grace the silver screen, and this Blu-Ray edition from Cohen Media Group is the definitive home video release! It is, simply put, a must-own for any classic film lover’s collection. The 4K restoration work presented here is breathtaking, and as a lifelong film aficionado, it warms my heart to see such dedicated effort put forth to craft a stunning high definition release for fans. The Old Dark House on Blu-Ray receives my highest recommendation and is an essential pick-up this Halloween season.