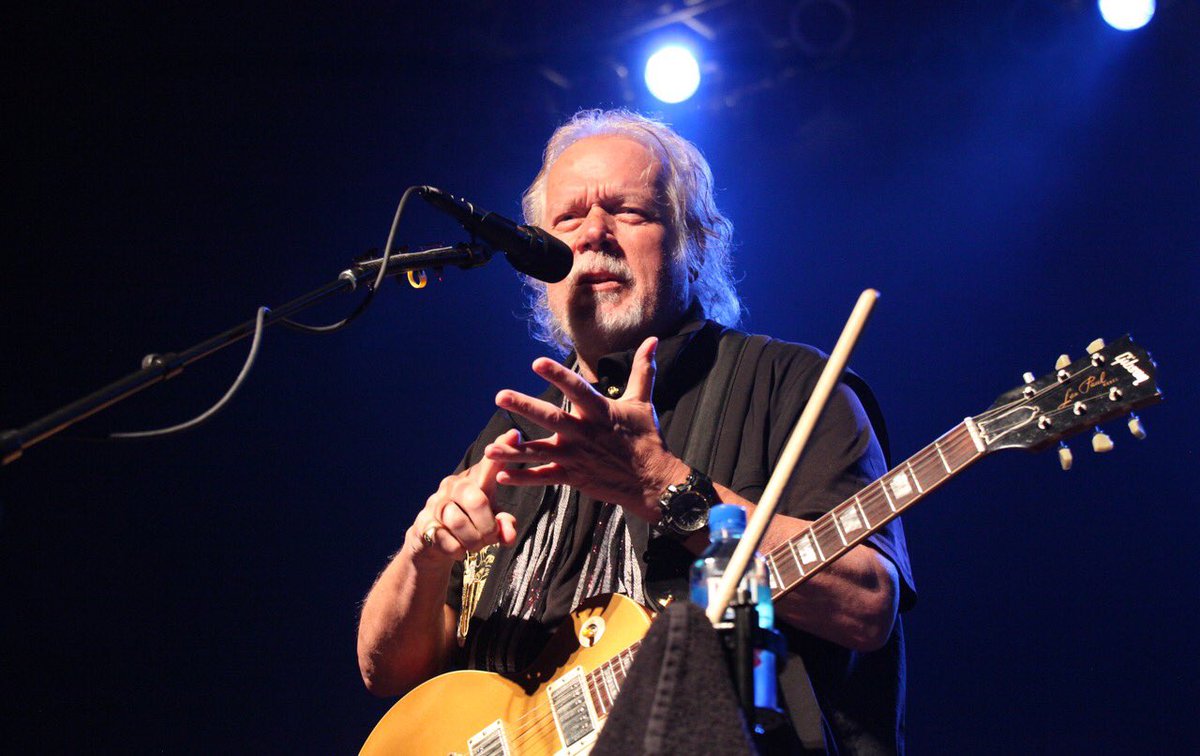 Randy Bachman talks about his new album, paying tribute to George Harrison, and his tour.

Staci Layne Wilson had the opportunity to sit down with Canadian musician Randy Bachman to talk about his new album By George which was inspired by Beatles guitarist George Harrison. During the interview, Staci asks Bachman about the tour as well as how he went about reinventing George Harrison’s music.

Staci Layne Wilson: Can you talk a little bit about the emotional core of how it felt to reinterpret George Harrison’s songs, and how you think they will make people feel when they get to see you perform them live?

Well, emotionally, when you do that, like with one song, you have to be very familiar with the song and the artist, or else, just like an actor. If you’re going to be a cop, go and drive around with the police for three months and see what they go through night and day. All the boring stuff besides the exciting stuff. So, when you’re trying to do a song like that, you try to immerse yourself into the character of the person and how they felt and where they were in their life at the time, and maybe you can bring some realism, some reality, to the song. Rather than just a quick performance, you can really become the character. And way, way back in the day, when a Beatles album came out, I always went to the George Harrison song, because I was the lead guitar, and I sang his songs. Our drummer sang Ringo’s songs. Our lead singer sang McCartney’s or Lennon’s songs. So I always went to George’s songs.

I’ve sung them all my life, but in the original style. Maybe three or four years ago, I got invited to Liverpool for John Lennon’s 75th birthday party. A friend of mine, Jeff Perry from Calgary, owns the Beatles stage play, Let It Be, which is four guys dressed up and they change costumes as the music progresses from black leather to Sgt. Pepper to their beards and hair and all that stuff. I just saw the celebration around John Lennon, and at the same time, I saw a documentary on George Harrison on BBC. It was three hours long. I think Martin Scorsese did it. It was very touching and very emotional. Then I came home to Canada, and I saw a shortened version of that, and George was actually live before he passed away, on VH1. They said at the end he was the most successful of all the Beatles in his solo career. And he owned all his own stuff because nobody wanted it. He was the leftover guy. Everyone wanted the Lennon and McCartney stuff.

I had this feeling about George, and then when I really got into that and started to so these songs, I literally felt he was in the room. For example, if you were going to act like some famous actress, and you studied them and you watched all their old movies. Then at home, you’re rehearsing in front of a mirror or with one of your kids or somebody else throwing lines at you, you feel this something in the room. I felt that many, many times. A lot of people said, “What you’re doing is stupid. It’s crazy. It’s insane. Nobody wants to rehear the Beatles stuff.” But I even felt when I would play something from iTunes, like If I Needed Someone, by the Hollies or the Seekers or Searchers, it’s the same 12-string, the same harmony, and halfway through, I’d be going, “Ho-hum, yawn. I don’t need to hear the rest of this.” But when you hear a different interpretation, like Ella Fitzgerald doing Savoy Truffle, you listen to that whole thing, and the jazz chords and the way she sings it. So I wanted to make it interesting.

And I thought, well, doing a whole album of George songs is really great for George and his estate. I need to get a song on there. If I was George, and I kind of was, like in my own lunchtime, my own life on stage, showing up at a session with mock Lennon, and mock McCartney, each with 30 songs. Let’s do a new Beatles album, and after they got tired and bored with each other’s stuff, “Hey, George, do you have a song?” I woke up in the middle of the night one night, feeling a presence in my room. Like, if you’re asleep and you wake up, and your little kid’s standing there with their teddy bear, their blanket, you know, they’ve had a bad dream. You take them to bed. They fall asleep. You take them back to their crib or their bed. I feel this thing in the room, this something.

So, I get up out of bed. It’s like three in the morning, and I go to my next room where my laptop is and I start writing lyrics that I would never have written, and I wrote Between Two Mountains, which is how I felt George felt between Mount Lennon and Mount McCartney. Outcomes these lyrics that I would never have written about there’s peace within, just look inside, be patient, love everybody. So instead of hating Lennon and McCartney, he loved them, and he loved the opportunity to be between them, and then his own mountain grew and grew from this love and positive thinking of his that, “I’ve got to get a song good enough to stand next to these guys.” Every song he did, we all loved, and it was good enough in its own way. His songs are written very differently than Lennon and McCartney’s. Those were written very Broadway, with an intro and a chorus and a middle eighth, which all Broadway songs have. George’s were just a stanza with repeated two lines, a stanza with the same repeated two lines over and over.

So, it became very easy for me to reinterpret, and also his singing style is like mine, where my singing range is five or six notes. It’s not like Elton John that has three octaves or Roy Orbison or something. For me, it was a very cathartic thing and I really felt a presence of George Harrison.

Staci: So, your tour, I know you’re playing in LA on July 21st.  What can people expect to hear and so forth?

Well, I’m currently touring. We started on George Harrison’s birthday because this album celebrates his 75th birthday. Like I was in Liverpool for John’s 75th, and I thought, “Who’s the youngest Beatle? Who’s next? Oh, George in a couple years.” So that gave me time to get into it and re-envision the songs and record it. We played it on his birthday weekend at B.B. King’s in New York, and then the next morning, Sunday morning, which was really his birthday, we did Breakfast with the Beatles on satellite radio. So now I’m touring, and when we tour now, it’s called Every Song Tells a Story. I sit on a stool, and I tell how I wrote the songs for the Guess Who and Bachman Turner Overdrive and interspersed in there are three or four George Harrison songs from my By George album.

It’ll start out … Because people are sitting there in anticipation. I learned this from seeing the Eagles live many times. When they come out and you’re waiting for Witchy Woman and Hotel California, they start with three new songs. So, you’re not going to complain. You’re going, “Well, that’s pretty good. That sounds a little bit like New Kid in Town and that sounds a little bit like Already Gone.” Then they go into 12 hits. Then, they take an intermission. They come back with two or three new songs. So, that’s what I do. I start with three George Harrison songs that are all run together. It starts with Between Two Mountains that kind of explains the whole concept, and then I go to tell the story how I wrote These Eyes, She’s Come Undone, No Sugar Tonight, No Time. When I’m done those six or seven Guess Who hits, we take a break, we come back. We start again with another George song, and I go through the Bachman Turner Overdrive hits and how I wrote those, either alone or with Fred Turner, with a few George songs between.

So, it’s basically a two-hour show, maybe 2:20, with a break in the middle, but it’s really great, because I’m playing 12 or 13 of my hits, and maybe 5 or 6 George Harrison hits that everybody knows the lyrics to. The trick about … A lot of people do with the George Harrison album, they buy it, they play it for their friends for the first time, and play Name That Tune. Because it starts with a different key and a different tempo, and you have no idea what it is until I start singing. I’m singing the same lyrics and melody that you’ve known all your life since you were 16, or 15, or wherever you discovered these Beatles songs. So, that’s kind of the tour we’re doing, and it’s continued all through Canada. We’re coming back here to do the Troubadour on July 21st, and we’ll continue. We’re going to go to San Diego after that, and San Francisco, and things like that.

Staci: And where can people find information?

My website, randybachman.com. My official Facebook, which is updated every day. My daughter runs it and calls me every night. Nice to have your daughter call you every night, “Hey, Dad, when did you do this? When did you buy that guitar?” Because people are writing and asking those questions. And I can’t do it all when I’m traveling in airports, so every night, I’d speak to her for about an hour.

Staci: Well, it was nice talking to you. Best of luck on your tour.

Randy Bachman is currently on tour and will be playing all across the United States until November. To order tickets, please visit Bachman’s official site.