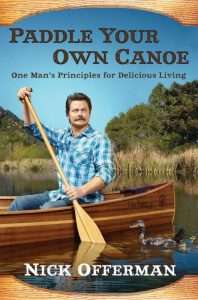 Paddle Your Own Canoe: One Man’s Fundamentals for Delicious Living by Nick Offerman, Review by Corinne Donnelly

Nick Offerman graced our screens for seven wonderful seasons as Ron Swanson on the much-loved TV show Parks and Recreation. In Paddle Your Own Canoe: One Man’s Fundamentals for Delicious Living, he regales the reader with the years prior to and including part of that happy period, which happen to be just as fascinating and hilarious as you would expect.

In his memoir and guidebook, Offerman provides wise words of advice for all members of society, particularly adults in the working world. While his bluntness about his personal beliefs and political affiliations could be off-putting to some, he makes it very clear that he does not want to push his opinions on the reader, which I found to be very admirable and refreshing. Offerman also touches upon his experimentations with drugs, which fascinates to say the least, but in my opinion, is probably not ideal for the ears and eyes of children.

If you were not already aware, the man is the epitome of funny. His tales of woe, happiness, and…well, downright stupidity (we all have those moments), massively amuse. You can parse out a lot of wisdom from his mistakes and successes. Offerman frequently acknowledges his ultimate triumph, obtaining the love and affection of his lovely wife, Megan Mullally. Frankly, his adoration for her takes the breath away. Forget Wesley and Buttercup, adios Romeo and Juliet, the love between Nick and Megan is the ultimate love story.

If you’re an aspiring actor, this is also the book for you. Offerman’s path to success was not an easy one, and he charged through many obstacles on his way to obtaining the elusive network television show contract. You’ll laugh, you’ll cry, you’ll scream at the studio executives (that’s normal, right?), but at least you’ll know that it doesn’t end in failure.

Offerman is also a huge proponent of self-reliance and fulfillment. He does not molly-coddle or beat around the bush when it comes to following your passion as a career. Few careers “pay off” right away, some careers take time, and many will never be your primary source of income. In fact, he proudly considers himself both an actor and a wood-worker. Ultimately, Offerman emphasizes that if you use your brains, talent and creativity to find a job that you like, and if you are willing to apply grit and hard-work to that chosen profession, you’ll live a full and happy life.

Nick Offerman’s Paddle Your Own Canoe gifts the reader with a thought-provoking look into a professional actor’s life and work. While he shares many similarities with his most well-known character, do not expect to hear from Ron Swanson. In fact, Offerman’s life provides an even deeper sense of entertainment and wisdom because it’s real. Grab a beer, grill some bacon, sit back, relax, and give this one a read!

Paddle Your Own Canoe: One Man’s Fundamentals for Delicious Living by Nick Offerman

Paddle Your Own Canoe: One Man’s Fundamentals for Delicious Living by Nick Offerman, Review by Corinne Donnelly Nick Offerman graced our screens for seven wonderful seasons as Ron Swanson on the much-loved TV show Parks and Recreation. I...
0
Average User Rating
0 votes
Please sign in to rate.