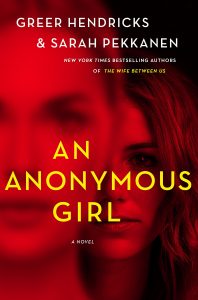 An Anonymous Girl is the second collaborative novel written by Greer Hendricks and Sarah Pekkanen. Their first novel, The Wife Between Us, was a huge hit this year and has since been optioned for a film. While I have not read their first novel, I suspect this one will be just as successful, despite my dislike for many elements within it.

An Anonymous Girl follows two characters: Jessica Farris, a participant in a morality study, and Dr. Shields, the psychiatrist holding the study. The two main characters narrate alternating chapters. Jessica’s chapters are written in first person, while Dr. Shields’ chapters are written in second person in the form of clinical notes about Jessica.

The structure of the novel is its greatest strength. The reader jumps head-first into the mind of Jessica, but knows little to nothing about Dr. Shields. As Dr. Shields’ study treads over the line of professionalism and into dangerous territory, the mystery behind the psychiatrist’s background and motivations deepens.

The plot is provocative and delivers a suspenseful and fast-paced story, but the characters are either too impassive or too exaggerated. There’s no happy medium. This is a common criticism I have of thrillers, yet I can often overlook it if the twists are stimulating and unpredictable. Unfortunately, I usually saw the reveals coming, and even when I didn’t, they were unsatisfying. There are also a lot of them, perhaps too many, as they become tiresome less than half-way through the novel.

The authors present the theme, morality, in the synopsis, and it is highly prevalent in the plot. Strangely though, it is not analyzed past the surface level. Morality is such a nuanced subject with endless angles to delve into, but the novel focuses mainly on mental instability and obsession. It’s disappointing that morality and ethics has been shoehorned into only the topic of mental illness.

If you’re looking for a quick read, An Anonymous Girl by Greer Hendricks and Sarah Pekkanen will most likely satisfy. Its unique premise may make up for superficial characters and a somewhat predictable plot, especially if you’re more interested in the journey than the pay-off at the end.

An Anonymous Girl by Greer Hendricks and Sarah Pekkanen will be released by St. Martin’s Press on January 8th, 2019.

Tweet
Share5
Pin
5 Shares
Summary
An Anonymous Girl follows Jessica Farris, a participant in a morality study held by the mysterious Dr. Shields. As the study crosses into dangerous territory, Jessica suspects that Dr. Shields' motivations may not be as harmless as they seem.
6
Fair