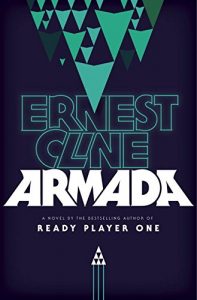 Ernest Cline’s first novel, Ready Player One, was such a sensation that it is difficult to find anyone who hasn’t read it. Armada, released four years after his spectacular debut, has not received as warm of a welcome. Readers usually expect a modicum of variety from an author, but unfortunately, there are far too many similarities between Cline’s two works. Both novels follow a young man with extraordinary gaming abilities that must work with other like-minded teenagers to overcome a dangerous, life-threatening evil. Toss in a long-distance romance, a twist or two, and a powerful corporate entity, and the plots are still astonishingly alike. On a surface level, the story is entertaining, but it ultimately comes across as far too shallow to leave a lasting impression.

Cline crafts Armada around a sci-fi invasion story, which is such a tired theme that if the plot is not approached from a unique angle, it stumbles along in a dull and predictable manner. A unique angle is exactly what Cline fails to produce. The novel could have been saved by the characters if they had more depth, but the main character, Zack, and his gamer geek friends are so similar in both their interests and actions, that it is often difficult to differentiate between them.

Ready Player One was set in a futuristic dystopia that was so cruel its inhabitants spent most of their days in a virtual reality known as the OASIS, which was modeled straight out of geek culture. Cline’s wild imagination conjured up a brilliant world that brought the page to life, and the references played an integral role in the plot. In Armada, the descriptions seem far less focused on innovation, and far more concentrated on plucking items out of the past in order to generate a feeling of nostalgia. Zack’s obsessions sprout specifically from the 1980s, when the classic video games, including the one the book is titled after, were created. Instead of adding covert references to gaming systems, movies, and TV shows, the reader is bombarded from all angles. Too many references easily become off-putting, especially when they seem to have no purpose.

The lack of meaningful and realistic relationships sets the bar incredibly low for any strong feelings to awaken in the reader. Every major twist and turn in the plot emphasizes action over character. When characters do interact, it is mostly through a screen, and consists primarily of spouting movie quotes at each other, flirting terribly, or expressing their remorse for not being a better mother/son/friend/insert title here. None of their exchanges are incredibly enlightening, and the more they say to each other, the more formulaic their thoughts and actions become.

Armada by Ernest Cline has nothing significant to add to the sci-fi genre. The nostalgic elements may entertain you, although how long that will last I cannot say, the wooden characters may frustrate you, but could also give you a good laugh, and the predictable plot may annoy you, but at least you won’t have to think too hard. If you’re looking for a decent sci-fi novel, I would steer clear of this one and re-read Ready Player One.

Tweet
Share2
Pin
2 Shares
Summary
If you’re looking for a decent sci-fi novel, I would steer clear of this one and re-read Ready Player One.
3
Bad

Armada by Ernest Cline, Review by Corinne Donnelly Ernest Cline’s first novel, Ready Player One, was such a sensation that it is difficult to find anyone who hasn’t read it. Armada, released four years after his spectacular debut, has no...
0
Average User Rating
0 votes
Please sign in to rate.