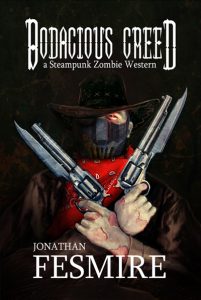 Jonathan Fesmire brings together zombies, the wild west, and steampunk, three distinct subjects, in his new novel, Bodacious Creed. Anna Lynn Boyd, the twenty something owner of a bordello in Santa Cruz, California, makes her living in mysterious ways. When Marshal James Creed comes to town in search of the notorious criminal, Corwin Blake, things go awry, and Anna’s secret talents must come into play. With a strong female lead, an elaborate setting, and more than one technological wonder, Fesmire’s novel makes for an entertaining read.

Fesmire’s setting, Santa Cruz in 1876, encompasses an entirely different world from our own, although he includes elements of truth. The factual details extend as far as specific street names and historical figures. The more creative embellishments, from mechanical beings dubbed automatons, which live and work alongside humans, to Anna’s expertise in the art of resurrection, add finesse to an already well-researched novel. An emphasis on listing the food that characters consume occasionally distracts from the story, but not so much to spread beyond minor irritation.

A strong female character is rare in many genres, especially westerns, so Anna and her technological proclivities is a true gem of a protagonist. Her “cover,” so to speak, as a madam of the local bordello, bequeaths her a sense of murkiness, despite her obvious good will in the community. At times she can seem a bit too perfect, but this is forgivable. Anna’s counterpart, James Creed, intrigues primarily due to his internal conflict and memory lapses. Much of the novel focuses on his crisis of identity and his aching need to find a place in the world.

The biggest issue I had with the novel is most likely one of personal preference. Anna often makes love to her mute lab partner, Jonny. Jonny’s an interesting character with a fascinating backstory, but the frequency of these lovemaking scenes diminishes his charm. I will admit though that these moments make sense in the context of the setting, so I digress.

The minor characters play just as important a role as the main players, which is unique. Lucky, Dixie, and Zero, Anna’s automatons, keep Anna safe and actively participate in many major events. The bounty hunter, Rob Cantrell, may be the character with the strongest arc, as he learns the consequences of working for money, while knowingly betraying his conscience. Even the horses are named and play important roles, although an odd quirk is that they are often referred to as “it,” instead of by a gender pronoun, which can be somewhat off-putting.

Jonathan Fesmire has written a highly original piece of work in Bodacious Creed. While it could easily be labeled a Halloween read, especially with its allusions to Mary Shelley’s Frankenstein and other common topics of the season (zombies, “robots”, and murderers, to name a few…), the story is much more than that, as it covers universal themes that can be enjoyed at anytime of the year.

Disclaimer: I received an e-galley of this novel from the author in exchange for an honest review.