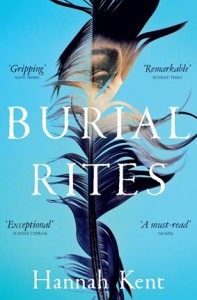 Agnes Magnúsdóttir is a dead woman walking. Burial Rites by Hannah Kent recounts the tale of the last woman to be executed in Iceland. Agnes, one of the main characters, has been sentenced to death for the murder of her former employer, and is sent to live out the remainder of her days on a rural farm. Meanwhile, she struggles to interact with the farm’s keepers, a poor family of four consisting of a mother, father, and two teenage daughters.  In order to help comprehend her fate, the district commissioner permits Tóti, a young assistant reverend, to read Scripture to Agnes and prepare her for her imminent demise.

This is Hannah Kent’s debut novel (she was 27 when the book was published!), but her language is so polished and her details so crisp and fresh that I would never have guessed it. The narrative is also written in multiple perspectives, which allows the reader to intimately connect to all of the main characters. I particularly enjoyed the sections written in the voice of the farm’s housewife, Margret. Where Agnes’ personality is meek and respectful, Margret’s is a force to be reckoned with. The women are the main focal point of the novel, and yet, they possess the least amount of power. It was captivating to read how much the men held sway over their lives, even from the grave.

Kent describes the setting of the novel, Iceland in the mid-1800s, in an incredibly haunting manner. It is a lonely place with a very unsettling class divide. Reading about the constant lack of heat, food, and supplies, was gut-wrenching. No-one here is well-off, especially the orphans and servants. Many scenes are so emotionally visceral that I often found myself holding back tears. Frankly, human nature’s lack of concern for the “undesirables” of the world frightened me more than the actual physical violence in the text.

The novel covers many heavy themes, including death, the power of religion, and the morality of capital punishment. Kent weaves them beautifully throughout the narrative, so the reader has enough time to reflect and ruminate. Her decision to write Agnes’ history as ambiguously as possible throughout the first half of the story also allows the reader to join the other characters’ journeys in deciding whether or not Agnes deserves to be executed for her crime. I found myself constantly tossed back and forth about whether or not she was innocent, which ultimately led me to wonder if it even really mattered.

Burial Rites by Hannah Kent skillfully covers a dark period in Iceland’s history. Agnes is a strong female character who I will forever remember having the pleasure to get to know through text. This debut impressed me so immensely that I decided to listen to the audiobook version a few days after I finished reading the novel. Morven Christie’s performance brought the characters to life in such a vivid way that I would highly recommend the audiobook as well. There is so much to love here that it would almost be a pity not to check out the novel, the audiobook, or maybe even both!