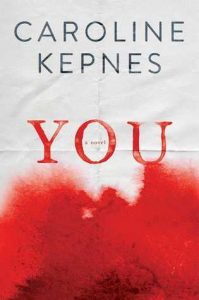 Occasionally I’ll stumble upon a book with a very deceptive synopsis. Caroline Kepnes’ novel, You, is primarily marketed as suspense, and while that is not entirely misleading, readers should be aware that it borders heavily on erotica. While Kepnes makes some bold choices in her narration, too much focus on extreme violence and sex significantly detracts from plot and character.

The protagonist, Joe, a twenty-something bookseller, immediately falls in lust with Guinevere, a young woman who walks into his bookstore. Despite being complete strangers, Joe creates an entire backstory for her in his head, and in the process immediately establishes himself as an unreliable narrator. Joe’s use of second person perspective fascinates, but while his voice is consistent, sometimes his highly passionate narration feels forced. As a result, many of the other main characters’ personality traits and quirks come off as exaggerated and shallow.

To make matters worse, the plot jumps from strange to outlandishly bizarre in mere pages. Kepnes presents every character in the novel, including some who only appear for a few chapters, as the absolute worst of humanity. I have never been a proponent of disliking a book because the protagonist is unpleasant, but when all of the characters are off-the-wall insane, it becomes exceedingly difficult to find the will to continue reading.

The heavily descriptive scenes of sex and violence, some real and many imagined, occur far too often. Joe’s obsession with Guinevere’s body not only verges on the obscene, but ends up annoying the reader with its repetition. Some scenes are so over-the-top, it would be laughable if it were not so disturbing. Moderation is often vital when it comes to making somewhat taboo topics believable, and moderation is what this book severely lacks.

You by Caroline Kepnes, Review by Corinne Donnelly Occasionally I’ll stumble upon a book with a very deceptive synopsis. Caroline Kepnes’ novel, You, is primarily marketed as suspense, and while that is not entirely misleading, readers s...
0
Average User Rating
0 votes
Please sign in to rate.