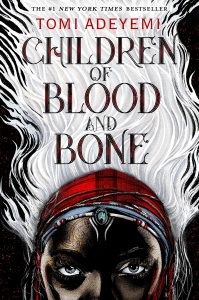 Last year it was difficult to escape the excitement surrounding Tomi Adeyemi’s YA fantasy novel, Children of Blood and Bone. The first in a planned series, the novel is set in Orïsha, a land heavily inspired by West African culture. Orïsha was once home to ten powerful tribes of maji gifted by the gods with different magical abilities. But when a despotic ruler, fearful of magic and its power, massacred all of the maji, magic ceased to exist. Zélie, the child of a fallen maji, Amari, a fugitive princess, and Inan, the crown prince, narrate alternating chapters as they set out on a quest to bring balance back to a dying land.

The novel starts out promising, but as the plot progresses, it loses its impact. Adeyemi wisely writes the opening few chapters through the voice of Zélie, a member of the oppressed diviners, the children of the fallen maji. Adeyemi excels at describing Orïsha and laying out the intricacies of its lost magic system, which drew its power from Yoruba incantations and the blood of the maji. The elaborate history she provides sets up a strong background for the rest of the novel. Things go awry with the introduction of royal siblings Amari and Inan.

Where Zélie spends significant time reflecting on her past and planning how to protect her family, Amari and Inan are characters of action. They set the plot alight, but often too quickly and too melodramatically. Events pile on top of each other, snowballing in intensity as the novel moves forward. At over 500 pages, Children of Blood and Bone is long, and yet, so much happens that certain sections feel too short. Everything is so fast-paced that it becomes difficult to remember or even care about events integral to the plot.

Throughout the first half of the novel, Zélie’s chapters address topics such as overcoming fear and fighting injustice. Amari’s sections seem quite passive and dull in comparison to Zélie’s, but she at least grows some depth as the plot moves forward. Inan’s chapters begin as irritating and quickly work their way to infuriating, especially as the second half of the novel devolves from addressing important issues like the evils of racism into such trivial matters as instant and forbidden love. The novel entirely loses the plot once all of the main characters fall down the rabbit hole of infatuation.

Strangely, despite their differences, the three main characters all possess the same voice. If the chapter titles weren’t labeled by the name of the character narrating, it would be difficult, if not impossible, to discern who is speaking. This same issue arises in dialogue. Every character’s speech pattern reads the same on the page, so much so that when no dialogue tags are present, it is hard to differentiate between speakers.

While I enjoyed learning about West African culture from within a fantastical setting, I was ultimately underwhelmed by Tomi Adeyemi’s Children of Blood and Bone. The common pitfalls of YA fantasy soured my feelings about the characters and their adventures. The structure of the book, particularly its uniformity of voice, also distracted me from the important themes, and muted what could have been a strong emotional response. I don’t believe I will pick up the next book, but I don’t regret seeing what all the fuss was about.

Tweet
Share4
Pin
4 Shares
Summary
Children of Blood and Bone by Tomi Adeyemi is the first novel in a YA fantasy series set in a land inspired by West African culture. What could have been an impactful novel is bogged down by YA fantasy tropes, too much action, and a uniformity of voice that confuses and distracts from important themes.
4
Poor