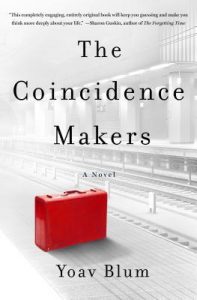 Someone is reading this review at exactly 4 PM. There’s no way I could know this, but it’s likely that at least one person actually is, and for them, that’s one hell of a coincidence. Yoav Blum takes the concept of coincidence and expands on it exponentially in his new novel, The Coincidence Makers.

When Guy, a former Imaginary Friend, starts his new role as a Coincidence Maker, he revels in his new-found freedom and sense of self. Guy’s preferred type of coincidence making involves matchmaking, likely a result of incessant pining for his lost love, Cassandra. His friends, and fellow co-workers, Emily and Eric, enter and exit his life from day to day, as well as appear in flashbacks as Guy reflects on his past.

The novel doesn’t just focus on Guy and his friends, as it occasionally departs into side characters that will play a role in later events. Short chapters interspersed throughout the novel also provide excerpts from Coincidence Making textbooks. The myriad of flashbacks and explanatory chapters allow Blum to unveil his world slowly and purposefully. While clever, this method of storytelling does hinder investment in the story. It is difficult to spark a connection when you’re thrown right in without much explanation.

Guy, the main character, is impassive to a fault. His motivations are hard to pin down, and his interactions with Emily and Eric seem forced. Emily has more depth to her, and she feels deeply, which is expressed well on the page. Eric comes across as unfocused and irreverent, and subsequently, is the most mysterious character. At times I wished he appeared more often.

The various roles in Blum’s world, including different levels of Coincidence Makers, the highest of which is the “Black Hat,” those “responsible for complex coincidences with extensive repercussions,” are fascinating, but not fully fleshed out. They were too self-contained within Guy’s past, and since Guy is such a dull character, his experience as both an Imaginary Friend and a Coincidence Maker never branch out beyond the mundane.

While the last quarter of the book picks up and the various plot threads start coming together, the novel still felt unfocused. The introduction of new characters more than half-way through the book didn’t help. I never quite connected with Guy and his decisions, and I found myself wanting more.

In The Coincidence Makers, Yoav Blum cleverly re-defines coincidence. In a world where coincidences are purposefully created by a third party, does that still make them coincidences? While I didn’t always appreciate the roundabout way the story was told, it certainly made me think, particularly about fate and free will. Blum has written an incredibly unique novel that not everyone will like, but that most readers will respect nonetheless.

The Coincidence Makers by Yoav Blum will be released by St. Martin’s Press on March 6th, 2018.

Tweet
Share4
Pin
4 Shares
Summary
Guy is a former Imaginary Friend starting a new career as a Coincidence Maker. As he travels down this new path, the reader discovers what brought him here and what the future holds.
6
Fair

The Coincidence Makers by Yoav Blum, Review by Corinne Donnelly Someone is reading this review at exactly 4 PM. There’s no way I could know this, but it’s likely that at least one person actually is, and for them, that’s one hell of a co...
0
Average User Rating
0 votes
Please sign in to rate.