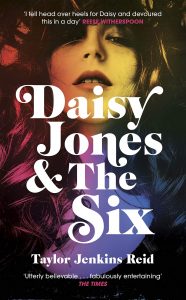 Taylor Jenkins Reid has a knack for creating characters that could easily pass for real people. Similar in style to her highly lauded novel The Seven Husbands of Evelyn Hugo, which was one of my favorite reads of 2017, Daisy Jones & The Six provides an intimate look into the lives of the members of one of the most popular rock bands of the 1970s. Don’t be fooled though, like Evelyn Hugo, these people and their band never actually existed.

The novel, written in interview format, is separated into sections highlighting important events leading up to the formation and eventual rise and fall of the band. Reid dumps quite a lot of background information into the first few chapters. While this helps establish character and setting, it quickly becomes tiresome, particularly for readers already familiar with the music scene during the 1960s and 70s. Reid plays into the stereotypes of the time period, which isn’t a bad thing per se, but it’s not always compelling.

One of the problems with dialogue-heavy interview format is how much it doesn’t hold up when you really think about it. It’s insanely difficult to pull meaty quotes from different people and separate sources, and then be successful at creating a coherent narrative. Reid can do this because these are her characters and they’re fictional, but it’s highly implausible that a book like this would work in real-life.

Fame is a fascinating subject to many people, myself included, and Reid analyzes it from every angle. When it comes to theme, she leaves no stone unturned, which is marvelous. Daisy and Billy, the main characters, are also fleshed out extremely well, so much so that it’s physically painful when things start inevitably going downhill for both of them. Despite the predictability of everything that comes to pass, their vibrant personalities and believable reactions to problems thrown their way remain compelling, and it’s difficult to put the book down.

Daisy Jones & The Six by Taylor Jenkins Reid is a good summer read, especially for people who enjoy learning about the lives of famous people, whether they’re real or not. Unlike a lot of celebrity tell-alls, which often focus too much on the superficial, Reid gives her characters a lot of heart, and this makes all the difference.

Tweet
Share13
Pin
13 Shares
Summary
Daisy Jones & The Six provides an intimate look into the lives of the members of one of the most popular rock bands of the 1970s. Don’t be fooled though --- these people and their band never actually existed.
7
Good

Daisy Jones & The Six by Taylor Jenkins Reid, Review by Corinne Donnelly Taylor Jenkins Reid has a knack for creating characters that could easily pass for real people. Similar in style to her highly lauded novel The Seven Husbands o...
0
Average User Rating
0 votes
Please sign in to rate.