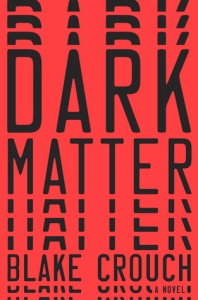 Dark Matter by Blake Crouch may look like a novel, but it reads far more like a screenplay. Whether this is a good or a bad thing is entirely up to the reader. Jason Dessen, a physics professor extraordinaire, lives with his wife, Daniela, and teenage son, Charlie, in Chicago. He leads an ordinary life, until he is assaulted on his way home from a friend’s party. That’s when things get complicated.

While fast-paced and exciting, Jason’s story feels too familiar. Many readers will have encountered a sci-fi thriller of this caliber before, although perhaps on television or at the movies. If you think reading from the perspective of the main character would make this format different or unique, you’ll most likely end up disappointed. For a hyper intelligent scientist, Jason makes the same mistakes over and over again without much internal reflection.

To make matters worse, Jason is the most fully fleshed out character of the bunch. Although he fixates on his wife and son, they never evolve beyond elusive prizes that Jason must fight to get back. Jason gains a friend on his journey back to his family, but she disappears just as quickly as she arrives. He also obsesses so much on his mission to return home, the plot moves too quickly for him to mature, let alone reflect and process.

While I was initially turned off by the simplicity of the narrative, admittedly, it was quite easy to get sucked into the action. The novel’s simple structure allows the reader to focus more on the movement between space and time. The one prominent theme, love and sacrifice, plays out well from chapter to chapter, and everything is tied up effectively at the end of the novel.

There’s nothing groundbreaking about Blake Crouch’s Dark Matter, but it will more than likely keep you entertained, especially if you are looking for a distraction. You’ll also be able to tell people that you read the book before it hit the screen, as I’m sure it will be optioned for a major motion picture sooner rather than later.