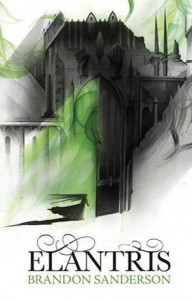 Fantasy aficionados are often notoriously difficult to please. In his debut novel, Elantris, Brandon Sanderson takes a huge risk by treading down a path that many new fantasy authors attempt to follow, and that is a novel heavy with political intrigue. The results are breathtakingly marvelous.

Elantris depicts a fantastical world that is falling apart in many ways. The novel shares its name with the former capitol in the kingdom of Arelon, which has since plummeted into sickness and disarray. Its prior inhabitants were composed of select citizens throughout the kingdom that became transformed by a process called the Reod, which also gifted them with magical powers and godlike beauty. Many years before the narrative begins, Elantris became “cursed,” and the city and its inhabitants were exiled and closed for business.

Elantris follows three main characters, all of whom possess fascinating back stories. Raoden, the prince of Arelon, finds himself in a dangerous quandary when he undergoes what was once the Reod, but is now an illness that transforms its victims into hideous creatures that appear to be dead but continue to live on, and hence, must be cast out into the ruins of Elantris forever.  Serene, the princess of Teod and also Raoden’s fiancé, arrives in Elantris just days after Raoden “dies”, and thanks to outdated laws, is now a widow in an unknown land. Last but certainly not least, Hrathen, a warrior priest from Fjordell, travels to Arelon in an attempt to convert the people to his violent religion. If they do not comply, he will be forced to massacre them all.

Despite the novel’s (unsurprisingly) substantial length, there is never a dull moment. When the reader’s not embroiled in the antics of its protagonists, he or she is most likely ruminating on the various aspects of the novel dealing with its complex political systems and various religions. Sanderson’s world is vast and incredibly detailed. It’s very easy to get lost in the scenery and its many philosophical dilemmas, but this is a fabulous predicament to be in. It is hard for me to remember a time when I’ve ever been able to visualize a novel and its characters so well. You don’t just read Elantris, you live and breathe it.

If you’re a fantasy lover, Elantris is a reading experience you cannot miss. I would not be surprised if it becomes the new standard that fantasy authors must aspire to reach. And if you’re like me, you’ll probably end up adding Brandon Sanderson to your list of new favorite authors. Luckily, he has published a plethora of books in the past ten years, so you’ll have a lot to add to your “To Be Read” pile!

Elantris by Brandon Sanderson, Review by Corinne Donnelly Fantasy aficionados are often notoriously difficult to please. In his debut novel, Elantris, Brandon Sanderson takes a huge risk by treading down a path that many new fantasy auth...
0
Average User Rating
0 votes
Please sign in to rate.