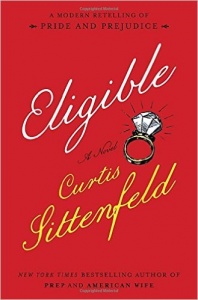 Eligible: A Modern Retelling of Pride and Prejudice by Curtis Sittenfeld, Review by Corinne Donnelly

It is a truth universally acknowledged, that a reader in possession of a sentimental mind must be in want of a retelling. Eligible: A Modern Retelling of Pride and Prejudice by Curtis Sittenfeld is the fourth installment in The Austen Project, a series that pairs contemporary authors with Jane Austen’s six complete novels. Attempting to modernize Pride and Prejudice, arguably Austen’s most famous work, is a daunting task. Sittenfeld’s dedication and effort deserve credit, but unfortunately, in her hands the plot, characters, and atmosphere fall horrifically flat.

Pride and Prejudice holds up so well due in part to its universal nature. The particulars may differ, but the fundamentals of courting, social structure, and reputation remain the same. Where Eligible goes wrong is in the gargantuan changes made; nothing feels familiar because everything is different. Sittenfeld bequeaths main characters with lazy nicknames (Elizabeth is Liz, Fitzwilliam Darcy is just Darcy, and Mr. Bingley is Chip), as well as gives them uncharacteristic professions (Liz works for a gossip magazine, Jane is a yoga instructor, and Chip is a doctor/reality show star). Notably, they are also aged up a decade or so. Jane resembles herself the most, but Mr. Bingley as Chip is completely unrecognizable. His obsession with finding love, going so far as to join a reality show resembling The Bachelor, appalls. These new characters are not just modern versions of their namesakes, they are obnoxious caricatures. Nothing amuses or satisfies the reader when once loveable characters come off as shallow and unpleasant.

When characters change so drastically, relationship dynamics alter too. Much of the appeal in Elizabeth’s and Mr. Darcy’s courtship comes from their witty banter. They do not converse much in this retelling; they text and have hate sex. In the original work, Jane and Mr. Bingley complement each other so well because they have gentle and shy demeanors. Unfortunately, Chip’s flirtation with fame and Jane’s sudden, life-altering decisions lead to forced and awkward interactions on the page. The Bennett family relationships do not escape the massive rework either. In an effort to create an element of differentiation between the generations, Mr. and Mrs. Bennet are portrayed as close-minded and quarrelsome relics with little to no patience for their exasperating brood of grown children. Their youngest daughters, Lydia and Kitty, lazy, CrossFit obsessed Millennials, refuse to respect their parents and act out in ridiculous ways. Mary barely interacts with anyone, and Liz and Jane merely visit their family, as they both live in apartments in New York. Too many superficial interactions transform a classic satire into a gossipy and humorless mess.

The most surprising addition to the plot is the inclusion of a new character that plays a large part in the scandal that almost destroys the Bennet family’s reputation. Mr. Wickham (Jasper) does appear in the novel, but his moment in the spotlight is miniscule compared to the new character, Ham, who Lydia finds herself enamored with. This twist is certainly the most “modern” element of the story, and the most unexpected, especially since it has no counterpart in the original work. Unfortunately, the scandal does not come off as controversial and damaging as everyone seems to think it will. Ironically, this is probably because Ham is the most likeable character in the novel.

Curtis Sittenfeld’s Eligible is a poor representation of Jane Austen’s Pride and Prejudice. The changes are so bizarre that they will likely leave you speechless. Prepare yourself for the last chapter, as it pops up out of nowhere, has no purpose whatsoever, and wraps up the plot on an even more dissatisfying note. By the end of the novel you may end up asking yourself, was the author actually a fan of Pride and Prejudice prior to tackling this book? It certainly doesn’t seem like it.

Eligible: A Modern Retelling of Pride and Prejudice by Curtis Sittenfeld, Review by Corinne Donnelly It is a truth universally acknowledged, that a reader in possession of a sentimental mind must be in want of a retelling. Eligible: A Mo...
0
Average User Rating
0 votes
Please sign in to rate.