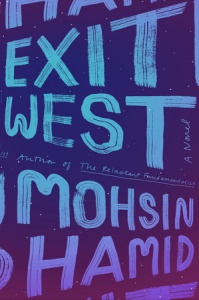 Mohsin Hamid’s Exit West packs quite a punch, despite clocking in at less than 250 pages. Main characters Nadia and Saeed fall in love during a period of civil unrest in their country. When the hatred and violence intensifies, the two lovers set out on a harrowing journey west—with a magical twist. The novel’s release early this year could not have come at a more fitting time. The prose is simple, but beautiful, and reads quickly, but don’t be fooled, as the story is difficult to tackle emotionally.  While the heavy emphasis on character growth effectively pulls the reader into the story, the fantastical elements of the plot felt somewhat misplaced for a novel addressing such serious topics as war and migration.

The novel’s marketing places emphasis on the love story, but it’s far more than that. This is a story about humanity. As stated in the narrative: “We are all migrants through time.” Nadia and Saeed must navigate not only the dangerous waters of their former home, but also the hateful reception they receive in the cities they emigrate to. Their method of movement, magical doors that pop up randomly around the world, receives far less attention than their journey, which confuses occasionally, especially since the majority of the plot revolves around their use. Luckily, the novel makes up for this oversight through its strong characters.

Together, Nadia and Saeed are a formidable pair. Away from each other, Nadia steals the show. Nadia’s rebelliousness and independent streak sets her apart from Saeed’s passive and traditional nature. Her confidence and intelligence sparks their escape. Saeed is most fascinating when interacting with his family, but once the two characters leave the city, his story fizzles out. Nadia and Saeed do evolve quite significantly for such a short novel, and Hamid manages to make their rapid growth convincing, which is impressive.

The themes peppered throughout the novel add a philosophical element to the plot. I constantly found myself questioning human motives. Are we really so selfish that we would willingly refuse to help fellow humans in mortal danger? It’s an unsettling question, but definitely worthy of reflection in this day and age. But the book addresses far more than whether or not countries should accept refugees. Displacement, self-preservation, and the ills of war are just a few of the many topics it tackles.

Exit West by Mohsin Hamid is a timely read that addresses many of today’s most pressing political issues. Nadia’s and Saeed’s story will connect you to the plight of the refugee at a far more intimate level than merely reading about it in the news. These are real issues, and real people are dying. Take a few hours and read this book, if only to see the world through their eyes for a moment.

Exit West by Mohsin Hamid, Review by Corinne Donnelly Mohsin Hamid’s Exit West packs quite a punch, despite clocking in at less than 250 pages. Main characters Nadia and Saeed fall in love during a period of civil unrest in their country...
0
Average User Rating
0 votes
Please sign in to rate.