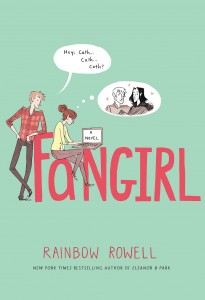 Many Millenials will begrudgingly admit that they’ve read a fan fiction story once or twice in their lifetimes. Some of us (cough) even have a secret account with stories we’ve written over the years. Rainbow Rowell’s Fangirl is a fan fiction writer’s dream come true. It follows Cath, a newly-minted college student, a popular fan fiction writer, and a huge fan of Simon Snow, a series of books and movies that parallel the Harry Potter fandom.

Cath, the bulwark of her family, a trio consisting of her dad and her twin, spends much of the novel struggling to fit into college, a world she’s not familiar with. Simon Snow and writing fan fiction are her escape. When Cath realizes she’s not as adept as her twin sister at maneuvering within her new college environment, she burrows into herself and her writing.

A motley cast of eccentric characters, including Cath’s rough around the edges roommate, Reagan, her outgoing twin sister, Wren, her creative and often unstable father, Arthur, and her new friend, Levi, makes for an interesting state of affairs. Oh, and let’s not forget to mention Cath’s true loves, Simon Snow and his arch nemesis and occasional lover, Baz.

As enjoyable as the novel is a whole, I did have one major hang-up with it, and that was in its portrayal of mental illness. Cath’s father suffers from bipolar disorder and throughout much of the novel Cath fixates on how she doesn’t trust him enough to take care of himself. To make matters worse, Wren also spirals into a deep well of addiction. Cath believes that she is the only one who can save her family, so she goes to extreme lengths to help them both. The reader notes fairly early on that Cath also has her own issues, but she never fully addresses them to such a level that she also receives treatment. To me, this was a glaring oversight. I could never be truly satisfied with the ending until I knew that Cath not only helped her family, but helped herself too.

Rowell’s novel features a plethora of relatable characters, but falls short in the ending. I still recommend it for the nostalgia factor. If you are a fan of any popular book or movie series, you will find a lot to love.

Fangirl by Rainbow Rowell, Review by Corinne Donnelly Many Millenials will begrudgingly admit that they’ve read a fan fiction story once or twice in their lifetimes. Some of us (cough) even have a secret account with stories we’ve writte...
0
Average User Rating
0 votes
Please sign in to rate.