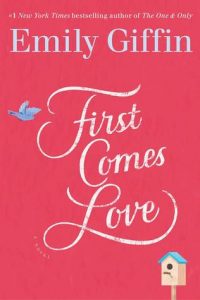 Emily Giffin’s First Comes Love begins with a tragedy. Fifteen years later, a family still reels from the aftermath. Sisters Meredith and Josie, now in their mid-thirties, narrate alternating chapters as they go about their average lives tinged with guilt and sadness. Unfortunately, their antagonistic, but equally grating personalities, as well as their inability to make mature decisions, detract immensely from the plot. It also proves exceedingly difficult to feel any pity for their individual woes as one or the other gossips left and right, lusts after a currently married ex-boyfriend, and keeps life-altering secrets from family members and friends who clearly do not deserve to be left in the dark.  If you don’t enjoy massive amounts of drama, put down this book immediately.

Meredith is a bitter housewife who whines and moans about the choices she has made in life. An aspiring actress, she abandoned her dreams when she decided to marry and have a child. Her regret manifests itself through extreme pettiness and disrespect for both her husband and her sister. Josie, a primary school teacher, enjoys her job, but mourns never starting her own family. After a slew of terrible dates and the disastrous revelation that her ex-boyfriend’s daughter will be in her class, she begins a haphazard quest to amend her mistake. Since Meredith and Josie are both so obsessed with their own problems, everyone who crosses their paths remains incredibly one-dimensional. Apparently, there’s not enough space on the page for anyone else, which is a glaring oversight.

The narrative, while revolving primarily around the impact of the tragedy on the two sisters, occasionally branches out into side plots, one of which thoroughly irked me. In an attempt to create her own happy family, Josie swiftly decides to have a baby with a sperm donor. Assisted reproduction is a very complicated and expensive process that requires a lot of planning, and should involve, at the very least, a donor agency. What is absolutely, 100% not acceptable is choosing a donor on a blind date, which is precisely what Josie elects to do. Even though this is fiction, Josie’s choice sets an extremely dangerous precedent that I cannot endorse. It is also incredibly upsetting and inaccurate how easily and quickly everything seems to fall into place for her. It’s rare, if not impossible, to decide to have a baby, find a donor, take the medication, and go through the procedure in a mere few months. The entire plot thread would be laughable, if it weren’t so infuriating.

It would be an understatement to say that Meredith’s and Josie’s sisterly relationship is toxic. Both women despise each other for deeper reasons unknown to the reader until the end of the book. Even once all is revealed, no growth occurs. Neither woman matures, both get precisely what they want, and they do not appear to have learned anything in the process. While Giffin touches on the themes of guilt and family, the plot and character interactions never explore them on a deeper level, which leads to an incredibly hollow and disappointing finale.

First Comes Love by Emily Giffin does not succeed in painting a realistic portrait of an average family coping with a loss. Giffin’s characters focus far too heavily on trivial matters and selfish wants than on the well-being of their family. The book strikes me more as over-dramatic drivel than an honest portrayal of grief. If you’re willing to forgive deplorable and immature behavior in fully grown adults, you may eke out some entertainment from this book, but if you pick it up, I’d highly recommend reading it with a hard drink in hand.

First Comes Love by Emily Giffin will be released by Ballantine Books on June 28th, 2016.