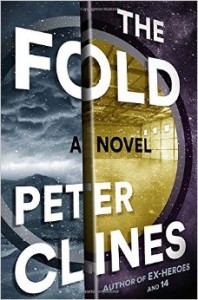 Intriguing plots often strike a chord in the minds of readers, since we are constantly in search of novels with concepts that we have not read about before. The Fold, a science fiction book written by author Peter Clines, is narrated by Mike, a teacher with a photographic memory who is recruited as a consultant on a top-secret project funded by the U.S. government. The plot sounds so interesting, but unfortunately its execution falls extremely flat.

The story begins well enough with an incredibly thrilling first chapter that leaves you eager for more. Then, the second chapter happens, and that momentum dies quickly. Not only does the perspective change, but the entire tone of the book shifts. We never hear from the character in the first chapter again. This choice frustrates immensely, and frankly, is too jarring to recover from. I even had to put the book down for a few days before I could feel any sort of attachment to the new narrator.

Unfortunately, the new narrator (and main character), Mike, brings to mind an insufferable know-it-all. Clines’ attempts to portray him as a reluctant genius, someone who does not want to use his incredibly high IQ to succeed in life, fail miserably. In fact, most of Mike’s commentary involves him explaining to others how his eidetic memory works. Also, for someone allegedly so intent on disliking his gift, he sure does use it a lot. To make matters worse, all of the other characters meld together into the “eccentric scientist” stereotype.

Pop culture references pop up intermittently throughout the narrative, and they come at incredibly inopportune times, as well as far too often. Clines also beats the reader over the head with the “top secret” nature of the project that Mike investigates. Many surprising and peculiar twists befall the characters, but eventually so many occur that anything more thrown on the pile quickly loses its charm.

The Fold by Peter Clines is an action-packed book, but not an overly satisfying addition to the science fiction genre.  It reads like a video game that overlooks multifaceted characters, and instead waxes heavily (and poorly) on fringe science. Don’t think too hard while reading it or you may find yourself very disappointed.

The Fold by Peter Clines, Review by Corinne Donnelly Intriguing plots often strike a chord in the minds of readers, since we are constantly in search of novels with concepts that we have not read about before. The Fold, a science fiction...
0
Average User Rating
0 votes
Please sign in to rate.