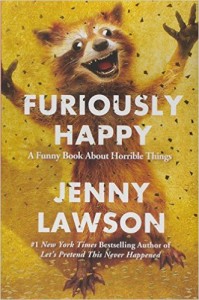 Jenny Lawson is a writer and blogger recognized for her witty observations on life, wellness, and mental health. Her second novel, Furiously Happy: A Funny Book About Horrible Things, expands on her fascinating world filled with bizarre and hilarious happenstances.  The audiobook, narrated by Lawson, was recently announced as an Audie Award 2016 finalist. While the novel has many funny and poignant moments, it occasionally lacks structure and purpose, which Lawson’s eccentric narration accentuates.

Furiously Happy reads like a humor book with elements of a memoir strewn in, as Lawson comments quite a bit on her upbringing and family life. Unlike a memoir, the narrative jumps around quite frequently, as the author presents her life in a disjointed manner. She will begin discussing one topic, which will remind her of another, which will then lead to a flashback or even a flash-forward. Unfortunately, these abrupt departures do not translate well to audiobook format, as it can be difficult to remember when one chapter ends and the next begins.

Don’t get me wrong, Lawson’s antics and exaggerated retellings of her daily life left me in stitches numerous times. The inclusion of her voice and mannerisms also adds a lot of heart to the book. The fact that she does not take herself very seriously makes her incredibly relatable and sympathetic, despite the occasional dark humor and sarcasm presented throughout the narrative. Listening to Lawson is like catching up with an old friend who leads a very entertaining life.

Lawson’s open and honest portrayal of not just coping, but living well with mental illness is one of the strongest and most impactful threads running through the novel. Her bluntness about her depression, as well as the fanciful and adventuresome efforts she makes to quell its inevitable tide of sorrow is so incredibly admirable. She is also not afraid to mention her use of antidepressants, which I found refreshing. We need more activists like Ms. Lawson to help others understand how to cope with the mental health crisis the United States is currently facing.

Furiously Happy: A Funny Book About Horrible Things by Jenny Lawson portrays the life of an ordinary woman fighting an extraordinary internal battle with humor and style. While Lawson’s narration possesses a rambling quality to it, which can occasionally frustrate the listener in large doses, it does not detract from an overall enjoyment of the novel. If you’re in the mood for an engaging listening experience with doses of weird humor and unexpected nuggets of wisdom, this will certainly do the trick.

Furiously Happy: A Funny Book About Horrible Things by Jenny Lawson, Audiobook Review by Corinne Donnelly Jenny Lawson is a writer and blogger recognized for her witty observations on life, wellness, and mental health. Her second novel, ...
0
Average User Rating
0 votes
Please sign in to rate.