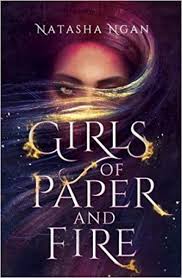 Girls of Paper and Fire by Natasha Ngan is the captivating first novel in a new diverse YA fantasy series. Seventeen-year-old Lei lives in the land of Ikhara, loosely based off of Malaysia, where the author spent most of her childhood. Don’t be fooled by the familiar though, as the fantastical makes an early appearance in the form of the society’s three castes: paper, steel, and moon. Lei and her family are part of the paper caste, the lowest of the three. All paper caste members are fully human with no special abilities. Members of the steel caste possess demon-like qualities which manifest in animal-human hybrid physical features, some of which present special abilities. The rarest and most revered caste is moon. The moon caste is fully demon with complete animal capabilities. Moon is also the most powerful caste, and Ikhara is ruled by a Demon King. When Lei is abducted by a steel general and given to the Demon King in tribute as one of his “paper girls,” her future seems set in stone, but Lei is not one to submit to tyranny.

In order to encourage peace following a civil war, every year one paper caste girl is selected from each of the eight provinces and presented to the Demon King. The families of the chosen girls are showered in gifts and riches, while each paper girl is brought to the palace to live in luxury, with one immense caveat. For one year, they must give themselves fully to the king. The Demon King has a notoriously insatiable appetite for young virgins, and his ferocity is known throughout the land. Ngan does not shy away from depicting dark subjects. Sexual assault and rape is prevalent, but she writes these scenes carefully. It also helps that while she depicts plenty of unhealthy relationships, there are healthy ones to retreat to when things get too depressing.

Speaking of relationships, Ngan writes them beautifully. From the very beginning of the novel, Lei’s relationship with her father, Baba, and her dog, Bao, is incredibly endearing. When she is cruelly ripped away from them, the devastation is palpable. When Lei is stolen away to the Hidden Palace to be a paper girl, she never expects to make friends, but as time goes by, her relationship with each of the girls blossoms in different ways. While she doesn’t get along well with everyone, even the conflicts that arise come across as realistic and intimate. When Lei does find love, and a forbidden one at that, it is so natural and affecting that the pair seem to not only enhance each other strengths, but complete each other fully.

While the overarching plot is fascinating on its own, the sub-plots add more intrigue. If you enjoy reading about family tragedies, political machinations, and/or revenge, there’s a lot here to whet the appetite. Ngan is also quite talented at weaving together slower passages full of character development with fast-paced action sequences. If you like martial arts, you’ll be pleased.

There’s a lot to love in Natasha Ngan’s Girls of Paper and Fire, but most of all, it’s refreshing to follow an empowered young female protagonist. Her refusal to submit to the horrors thrust upon her is inspiring, and we need more of that in life and literature. The novel ends on a cliff-hanger, which I could have done without, as I will be picking up the next installation in the series regardless, but I understand the reasoning behind it. I often hesitate to recommend incomplete series, but I can confidently say that this is one I expect will continue to be satisfying until its eventual conclusion.

Tweet
Share6
Pin
6 Shares
Summary
Girls of Paper and Fire by Natasha Ngan is the captivating first novel in a new YA fantasy series. Set in a mystical land of demons and magic, it follows seventeen-year-old Lei as she navigates her new life as one of the king's consorts.
9
Amazing