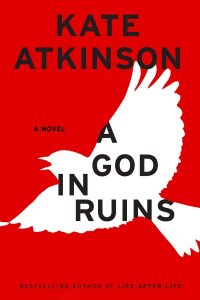 Kate Atkinson’s A God in Ruins, a companion novel to her highly acclaimed Life After Life, follows Ursula Todd’s younger brother, Teddy, from his early childhood in the 1920s into his twilight years past the new millennium. While I would recommend reading Life After Life first, it’s technically not necessary, as A God in Ruins is a standalone story with minimal connections to the first book.

Much like in Life After Life, Atkinson plays with the narrative structure, as she presents Teddy’s life out of sequence, in chapters, even sections within chapters, that flip back and forth from past to present and back again. The omniscient narrator gives the reader an all-encompassing view of Teddy’s thoughts, desires, and shortcomings, as well as those of his family members and close friends. Observing Teddy’s life from so many different angles and perspectives engenders an unusual sense of intimacy from the very beginning of the novel.

Occasionally, the time jumps can be frustrating and disorienting. While all of the characters change subtly throughout the novel, it is sometimes hard to pinpoint when and why they did. Since the novel is also heavily character-driven, the structure often works to its detriment. When time shifts backwards and forwards, it feels like the plot meanders, even when that is not necessarily the case. Atkinson also devotes entire sections to the minutiae of life as a Bomber Command pilot in World War II, including descriptions of types of planes and their mechanics, as well as specific maneuvers that were difficult to visualize. These sections are insightful to an extent, but could have been culled rather significantly.

The true genius at the heart of this novel is the theme. Teddy struggles with his self-identify from early childhood, as he feels he must constantly compete with a fictionalized version of himself from a series of children’s books (The Adventures of Augustus) written by his aunt. When he survives ridiculously high odds following his service as a pilot in World War II, this exacerbates his inner turmoil. The entire book is a heartbreaking acknowledgement of survivor’s guilt. Teddy is just an ordinary man who, after surviving extraordinary circumstances, feels he must now live a life worthy of his peers who died before their time.

While it has its shortcomings, especially in comparison to Life After Life, Kate Atkinson’s A God in Ruins is a captivating multigenerational story. Since it dramatizes one man’s life, there’s a bit of everything, and since it’s set during a tumultuous time in history, there’s a lot to cover. If you enjoy historical fiction or even long, sweeping sagas, I would highly recommend this book.

Tweet
Share6
Pin
6 Shares
Summary
Kate Atkinson’s A God in Ruins, a companion novel to her highly acclaimed Life After Life, follows Ursula Todd’s younger brother, Teddy, from his early childhood in the 1920s into his twilight years past the new millennium.
7
Good

A God in Ruins by Kate Atkinson, Review by Corinne Donnelly Kate Atkinson’s A God in Ruins, a companion novel to her highly acclaimed Life After Life, follows Ursula Todd’s younger brother, Teddy, from his early childhood in the 1920s in...
0
Average User Rating
0 votes
Please sign in to rate.