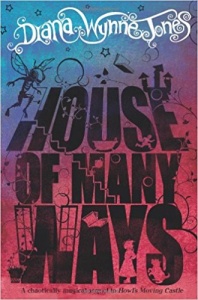 House of Many Ways, the final book in Diana Wynne Jones’ Howl’s Moving Castle trilogy, struggles to maintain the same caliber of writing and creativity as the rest of the series. House of Many Ways introduces another set of new characters: Charmain, an impractical, often irresponsible, book-obsessed young girl, her Uncle Norland, a royal wizard, and Peter, his self-effacing, hapless, and unskilled apprentice. While Sophie, Howl, and Calcifer play a significant role in the story, their personalities differ enormously from the first two books. A meandering plot, a lack of connection to the new and old characters, and a mostly absent antagonist results in an underwhelming reading experience.

Where Castle in the Air concentrates on exotic magic (genies, flying carpets, and djinns), House of Many Ways dabbles in folklore, although less effectively. Jones adds in background characters called kobolds, which appear in German folk stories as pesky sprites. The antagonist is also an odd creature called a lubbock that lays eggs in humans, which when hatched, kill the host. As interesting as these characters sound, their presence is not utilized effectively. The lubbock only directly shows up in one chapter, and afterwards is merely referenced throughout the rest of the book. The kobolds are described repeatedly, but they play such minor roles in the plot that the heavy description seems unnecessary.

Jones writes Charmain and Peter, the two main characters, in such a simplistic manner that it would be laughable if it weren’t so annoying. She beats the reader over the head with how their personalities and the actions they take are the complete opposite of the other. Howl, Sophie, and Calcifer appear rather early on in the plot, but even they cannot save the book from mediocrity. Howl is purposefully not himself for the majority of the book, but this choice is taken to an uncomfortable extreme. Sophie is more exasperated than her usual persevering nature, and she takes little to no action in controlling her husband and child. Calcifer even receives far less time to make witty banter.

The most disappointing aspect of all comes from the lack of character development. On a surface level, Charmain’s adventure may lead to a satisfying conclusion, but her magical powers, which are strong from the very beginning of the book, never wane or intensify. She always gets what she wants and succeeds without much effort, so she never learns from her vices. Peter’s lack of magical skills never corrects itself and he continues to clean up after Charmain’s messes, even though she has proved again and again that she doesn’t care much for him or anyone else. Howl, Sophie, and Calcifer don’t contribute much at all to the conclusion, despite adding a few complications and a predictable twist or two.

Diana Wynne Jones’ House of Many Ways suffers in comparison to the first two books in the trilogy. The stakes are never high enough to hold much interest, the new characters are far too static, and the old characters too unfamiliar. If you choose to read it, I would recommend viewing it as a standalone, as it may dull the pain that comes from a disappointing finale.

Tweet
Share4
Pin
4 Shares
Summary
A meandering plot, a lack of connection to the new and old characters, and a mostly absent antagonist results in an underwhelming reading experience.
5
Average