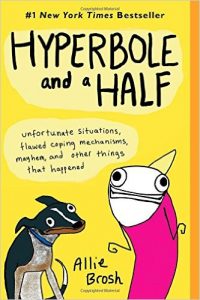 If you have not yet heard of Allie Brosh and her web-comics, I am just going to assume you have lived under a rock for your entire life. I kid, I kid (or do I?). In any case, you can make it up to me by picking up her book Hyperbole and a Half: Unfortunate Situations, Flawed Coping Mechanisms, Mayhem, and Other Things That Happened. Phew, that’s a mouthful.

Warning: Do not be fooled by the cartoonish cover page. While Brosh’s drawings look rudimentary and her writing seems simplistic, you’ll be surprised by how often her images and text punch you repeatedly in the feels. While her book is a humorous re-telling of events in her life from childhood to the present day, she does not shy away from tackling the heavy subjects, such as her struggle with depression. In fact, she is often at her best when she analyzes the darker side of her emotions.

The short chapters present various scenes in Brosh’s life. They are not ordered chronologically, which fits the haphazard nature of her musings. Besides her hilarious representation of herself, the reader also meets the acquaintance of her mother, her boyfriend, and her two dogs (lovingly named ‘the simple dog’ and ‘the helper dog’). Her relationships are presented in an exaggerated, but realistic manner. She never describes anyone as perfect, but when she focuses on their faults it is always from a place of love.

While each chapter has its own merit and contributes to the compilation, a few chapters stand out. The most entertaining sections include her dogs. She humanizes them quite a bit, which emphasizes their quirks and faults in an interesting and amusing way. Conversely, the most poignant chapters are by far “Depression Part One” and “Depression Part Two.” As someone who also suffers from depression, Brosh’s extremely personal examination of how it has affected her life and how she has slowly but surely learned how to manage it, both shocked and inspired me. I may have cried a bit too. But let’s just keep that between you and me.

Allie Brosh’s Hyperbole and a Half provides an incredibly personal portrayal of the trials and tribulations of coming of age in the world today. Brosh emphasizes well that life is a process, no-one is perfect, and identity is a constantly changing thing. She will not beat you over the head with philosophy either. In fact, you’ll probably be tricked into it by humor. You will leave this book with a spring in your step, a smile on your face, and a deeper understanding of yourself, quirks and all. Oh, and a better understanding of the true nature of geese (you’ll see what I mean).

Hyperbole and a Half by Allie Brosh, Review by Corinne Donnelly If you have not yet heard of Allie Brosh and her web-comics, I am just going to assume you have lived under a rock for your entire life. I kid, I kid (or do I?). In any case...
0
Average User Rating
0 votes
Please sign in to rate.