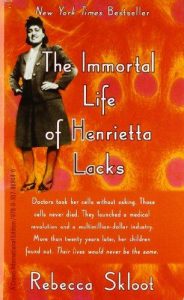 The Immortal Life of Henrietta Lacks by Rebecca Skloot chronicles the real-life story of Henrietta Lacks, an African-American woman whose cancer cells were used to create the famous HeLa cell line, which scientists all over the world have used in their research since the early 1950s. Skloot spent over a decade researching Henrietta’s life and the impact her cells have had on the scientific community, as well as her immediate and extended family.

Aside from a short prologue, Skloot begins her narrative in 1951 with Henrietta’s visit to see a doctor, when she first suspected something was wrong. Her sole option for treatment was Johns Hopkins, the only hospital in the area that would accept black patients at that time. During her treatment, two cell samples were taken without her knowledge and passed onto George Otto Gey, a physician and cancer researcher. Henrietta died less than a year later, at the age of 31, leaving behind her husband and 5 young children. Her cancer cells lived on.

The book spans many decades, detailing the lives and actions of numerous subjects in this scientific saga. A timeline precedes the title of each chapter, providing the specific year or span of years that the chapter focuses on. Skloot does not relate everything chronologically, so the timeline is very beneficial. It also helps soften the sometimes jarring switch from first to third person narration, since most chapters set in 1999 and above are written from Skloot’s perspective, as she herself becomes an integral character.

The narrative is anything but dry, even the chapters devoted solely to HeLa cells and scientific research. Skloot doesn’t just concentrate on Henrietta’s life, but delves into the specific scientists and researchers who made her cells famous. She spends entire chapters interviewing Henrietta’s family, and these sections are some of the most hard-hitting parts of the book, as the Lacks have not benefited at all from Henrietta’s legacy. In fact, they did not learn about Henrietta’s cells until 1975, nearly 25 years after her death. Deborah, Henrietta’s daughter, has been most affected by it all, and her story is equal parts heartbreaking and inspiring.

Skloot spends a significant portion of the book ruminating on the implications of the harvesting, usage, and commercialization of Henrietta’s cells without her or her family’s prior knowledge. The book takes a hard stance on the invasiveness of the practice of using patient cells in research without informed consent, which is still legal to this day. It really makes the reader think; how far is too far when it comes to scientific progress?

Rebecca Skloot’s The Immortal Life of Henrietta Lacks is a fascinating look into the woman behind HeLa. While she only lived 31 years, her cells have helped cure polio, have led to breakthroughs in a variety of diseases (including cancer, influenza, and AIDS, just to name a few), and have even been grown in space. This book is a testament to Henrietta’s life and legacy, and hopefully it has brought, if not justice, some semblance of peace to a family haunted by their mother’s death, her unexpected “immortality,” and what could have been.

Tweet
Share
Pin
0 Shares
Summary
The Immortal Life of Henrietta Lacks is the real-life story of Henrietta Lacks, an African-American woman whose cancer cells were used to create the famous HeLa cell research line. Her cells have helped cure polio, led to breakthroughs in a variety of diseases, and were even grown in space. Unfortunately, they were also taken without her consent, which presents an interesting ethical dilemma: how far is too far when it comes to scientific progress?
9
Amazing