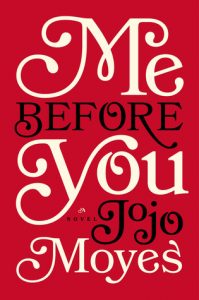 If you’re looking for a light and fluffy romance, Me Before You by Jojo Moyes is not your book. Moyes constructs a narrative with far more depth and controversy than the summary on the back cover would lead you to believe. She also effortlessly weaves humor and despair together in astounding ways. While a quick read, the book expands upon many important issues of the day, as well as provides a fascinating glimpse into how a young man and woman with two very different paths before them find a way to impact each other’s lives.

Louisa (Lou) Clark spends her average twenty-something life in a tiny town in England. She lives somewhat comfortably in her parents’ home and holds a job at the local bakery shop. Her life has welcomed little to no adventure thus far, and it doesn’t seem to bother her one bit. When Lou’s employer leaves town, she finds herself in her first major predicament in quite some time: the dreaded job hunt. After a slew of terrible fits at the local job center, Lou is reluctantly thrust into the life of Will Traynor.

Will Traynor used to spend his life in London where he was a highly successful associate in a large corporate firm. In his free time, he traveled all over the world, enjoyed his fair share of women, and spent oodles of cash on exciting exploits like rock climbing and motorcycling. He loved his life and had a bright future ahead of him. Two years later, he’s back in his hometown, confined to a wheelchair, and paralyzed from the chest down. When Will’s mother decides he needs another caregiver, he remains taciturn and belligerent, permanent states since the accident. Enter Louisa Clark.

As a pair, Lou and Will are both loveable and infuriating. They each have a very distinct sense of sarcastic humor and eventually get along with each other well, despite their flaws. Moyes excellently portrays the progression of their relationship from caregiver and charge to two equals struggling to find their way in an often cruel, but still beautiful world.

While Lou narrates most of the story, every so often a chapter or two comes from the perspective of a secondary character, usually a member of Will’s or Lou’s family. I wasn’t particularly fond of this choice, as it occasionally upset the arc of the plot, but it wasn’t confusing, just a bit jarring. Moyes also intermittently employs a different, more modern format of storytelling, as Lou befriends an online community of quadriplegics and Will begins to use voice-activated software to write. This format pops up just enough to place the book in the present day, but not so much to irritate the reader.

While the main conflict of the novel affects Will most directly, Lou becomes caught up in it, as she takes it upon herself to help him overcome it. Their journey is equal parts hilarious and heartbreaking, but most importantly, it makes you think. I was swept away by the struggles Will and Lou dealt with and how often their lives felt so out of their control. I felt so connected to them both that it physically pained me to finish. But just like life, everything must eventually end.

Jojo Moyes’ Me Before You is a whirlwind of a reading experience. It’s deeply emotional and intellectual and touches on many fascinating, sometimes disturbing topics. Moyes doesn’t shy away from controversy, and neither do her characters. You will come away from this novel with a newfound respect for the caregiving community, and a deeper understanding of one man’s attempts to take back control over his life.