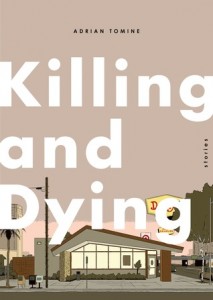 Killing and Dying: Stories by Adrian Tomine is a short story collection in graphic novel format. Each chapter delivers a brief glance into a character’s life with an emphasis on his or her fears, crushed dreams, and sorrows. All of the stories are separate from each other, so there are no obvious connections beyond theme and tone. The graphic novel compilation is a depressing, albeit realistic read, and each story leaves behind a feeling of futility and hopelessness.

Like many short story compilations, a few chapters keep you engaged, and a few not so much. Tomine’s very subtle story-telling, which is more often than not somewhat effective, could also be frustrating in the shorter stories. The shortest stories were precisely as you’d expect: too short. They left little to no room for dynamic character change, which means they do not make much of an impact.

Tomine brilliantly displays his artistic talent throughout the compilation. The illustrations, both classic and beautiful, impress immensely. Much like the stories, realism also plays an important role in his presentation. At times, the artwork is more immersive than the plot, which can be problematic, but at least the images capture the reader’s interest until the bitter end.

Each main character possesses a flaw that he or she either cannot or will not change. Additionally, most of the characters have also been haunted by something in their past, which they are still dealing with in their daily life. True to the novel’s title, some of them kill their flaw, some die by it, and some push through it. Each story is a reminder of something we all share: the constant battles we must fight to lead a happy and successful life.

On a surface level, there is nothing wrong with Adrian Tomine’s Killing and Dying: Stories. He is clearly a very talented illustrator and writer. Unfortunately, I found that the brevity of the stories hindered my ability to fully connect with the characters. Tomine seems to want to leave meaning up to the reader’s interpretation, but he does not provide enough background information for the reader to actively invest in the process of discovering that meaning. Regardless, the images are stunning and the stories mimic life quite accurately, so if you’re intrigued by the format and premise, I would still give it a try.