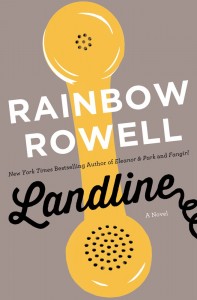 Rainbow Rowell, most well-known for her Young Adult novels, branches out into the realm of Adult Fiction for Landline. Georgie McCool, a comedy writer in Hollywood, struggles to juggle her hectic work and family life. When an important script deadline falls during the Christmas holiday, Georgie must stay behind while her upset husband, Neal, and their two young daughters travel to Omaha to celebrate with his family. Georgie soon discovers that Neal will not answer her phone calls, so she must find another way to try and save their marriage…

Landline is hardly a science-fiction novel, but in a bizarre turn of events, Georgie finds a way to speak with her husband in the past. (This is not a spoiler, I swear, as it’s mentioned on the back cover.) While this method of communication originally fascinates as a plot device, it loses its charm as the narrative drags on. Once Georgie discovers the device, she becomes obsessed. She uses it so often that the narrative turns into a mess of entirely predictable events and dull character choices.

Speaking of character choices, Neal and Georgie are both absolutely insufferable. Georgie possesses a bizarre sense of self that jumps back and forth between obnoxiously egotistical and annoyingly insecure. Through her various flashbacks, Neal is portrayed as a miserable, uncommunicative jerk. Who do you root for when you don’t like anyone? Their relationship is also so toxic that it terrifies me to think that anyone would want to pursue anything close to resembling it.

Furthermore, the writing is dull and plodding. I listened to the audiobook and it felt like I was listening to a train-wreck of an acquaintance ramble on and on about how much she hated her life. The first person perspective just added to my frustration. Unfortunately, Georgie’s life story never gets more interesting, even when she remembers the past. It keeps going on and on and on like the Energizer bunny without the charm. The only moments that grabbed my interest were the occasionally humorous references to the eighties and nineties peppered throughout the narration.

Landline by Rainbow Rowell is quite a let-down when compared to her other novels. Unfortunately, the plot, the characters, and the dialogue never feel up to par. It’s a difficult novel to get through, despite its rather short length. If you’ve never read Rowell before, I would skip it. It definitely does not do her justice.

Landline by Rainbow Rowell, Review by Corinne Donnelly Rainbow Rowell, most well-known for her Young Adult novels, branches out into the realm of Adult Fiction for Landline. Georgie McCool, a comedy writer in Hollywood, struggles to jugg...
0
Average User Rating
0 votes
Please sign in to rate.