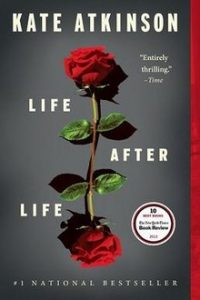 “What if we had a chance to do it again and again, until we finally did get it right? Wouldn’t that be wonderful?”

Life After Life by Kate Atkinson begins with the birth of Ursula Todd in 1910. Born into an affluent family in the English countryside, Ursula’s life seems destined for comfort and routine. And yet, when Ursula dies, her life resets. Everything suddenly restarts with fresh paths to venture and new decisions to make. But what happens when even small deviations cause much larger repercussions? Atkinson provides food for thought on a variety of philosophical questions as Ursula is born, dies, and is born again.

The novel’s structure is bewildering at the beginning, but becomes easier to navigate as the narrative moves forward. Admittedly, the first ten chapters or so are quite a struggle to endure due to their repetitive nature, but the story picks up the pace considerably once they have passed. These chapters should not be skipped though, as they introduce important symbols and imagery that will appear throughout the rest of the novel. If you’d like a hint, the chapter titles are more than mere decoration.

Since Ursula’s life begins again many times, character often surpasses plot in importance. The omniscient third-person narrator concentrates on more than just Ursula. The Todd family is a large one, and Ursula’s unassuming and pleasant manner attracts people to her, so there is never a lack of characters to appreciate. Following the different timelines closely also encourages readers to observe the different facets of each character’s personality, fueling deeper intimacy. When Ursula dies and time resets, the loss is sometimes overwhelming.

The novel doesn’t move forward in a predictable way. The reader never knows which events will be highlighted in Ursula’s many lives. Sometimes certain moments never appear at all because Ursula makes a different choice and the event never occurs. Huge changes can even be caused by minor variations, like the weather or merely standing in a different spot. The possibility of surprise is riveting.

Fate versus free will is the obvious theme of the novel, but the way in which Atkinson chooses to address it inspires analysis. From time to time, Ursula experiences déjà vu. She may not remember her past lives, but this prophetic sense can be the catalyst for her to make a different decision. If that is the case, can Ursula’s power be useful? If so, if her life always resets upon her death, does making changes have any impact? Is everything she does ultimately futile? That’s for the reader to decide.

Kate Atkinson’s Life After Life is a unique reading experience. How does one cope with the plot starting and ending, then beginning again with a high probability of change? Despite the challenge of following numerous timelines, confusion is a rarity. And even if you do find yourself trying to place a character being reintroduced, does it really matter? Every life is different, and ultimately: “Life wasn’t about becoming, was it? It was about being.”

Tweet
Share8
Pin
8 Shares
Summary
Ursula Todd, born into an affluent family in the English countryside, like every living thing, will eventually die. And yet, when Ursula dies, her life resets, and everything begins again.
8
Great