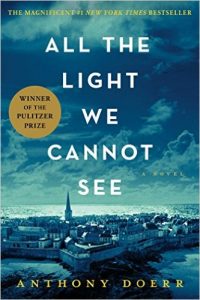 All the Light We Cannot See by Anthony Doerr is one of those books that you’ve heard so much about that you feel like you’ve read it before even picking it up. The Pulitzer Prize winning novel tells the story of two children spending their formative years in Europe during World War II. While Doerr writes beautiful prose and his descriptions are absolutely flawless, I found myself underwhelmed with the character growth and plot.

Marie-Laure, an inquisitive and altruistic blind girl living with her father in France, and Werner, a curious and stubborn boy fighting an uphill battle against his poverty-inflicted life in Germany, lead very different lives that eventually intertwine. Meanwhile, the war rages around them, and they fight in their own subtle, but meaningful ways.

The plot unfolds slowly, emphasized by time shifts amongst chapters and sections. Perspective changes between chapters added some frustration to my reading experience, as I often found Marie-Laure’s voice more engaging. Furthermore, about half-way through the novel, a new main character is tossed in the mix, and his mini-plot lessened more than enhanced my enjoyment of the novel. Ultimately, I felt more connected to the atmosphere and setting in the novel than to its characters.

While the novel is rightfully classified as historical fiction, there is also a thread of fantasy strewn throughout the plot. This thread felt the weakest to me, as it did not add much to the story. Marie-Laure’s and Werner’s struggles to lead significant lives provided a greater sense of fulfillment and emphasized the tragedies of war much more effectively.

On a more personal (and yes, very biased) level, I usually come away from novels about war with a heightened sense of its futility. Unfortunately, I never felt like I attached enough to the characters to attain a sense of catharsis. In fact, I felt that the fantastical element detracted from the novel’s meaning because it distanced the plot from reality.

The hype proved to me too much for Anthony Doerr’s All the Light We Cannot See. As much as I enjoyed the writing style, everything else struck me as surprisingly average. If you’re interested in atmosphere over character, I would still definitely give it a shot though, as Doerr’s writing certainly evokes a comprehensive and accurate vision of the time.