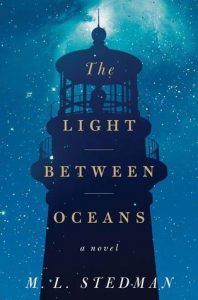 M.L. Stedman’s debut novel, The Light Between Oceans, radiates with a surprisingly fitting assortment of picturesque landscapes, morally ambiguous characters, and fascinating quandaries. The reader follows the life of Australian Tom Sherbourne with the narrative beginning around the time he has returned home after serving in World War I. While Stedman’s writing style evokes strong feelings for Tom’s well-being, a rather lengthy introduction and a few highly overdramatic scenes occasionally distract from the central themes of love, deception, and family, but not so much that it frustrates the reader.

The first few chapters of the novel drag on a little as the reader learns Tom’s background and about his desire to become a lighthouse keeper. Even though Tom’s introduction seems excessive, he remains extremely hard to read. His stoicism contrasts immensely with the personality of his future wife, Isabel. Unlike Tom, Isabel is an open book. Her intense and unfettered emotions fly off the page forcefully. Their whirlwind romance and the combination of their two distinct personalities create a perfect storm, which leads them into a unique and precarious situation involving the rescue of an infant.

The most poignant and heartbreaking moments in the novel elaborate on the powerful bond between mother, father, and child. More specifically, Stedman often asks her readers, what exactly defines a family? The main conflict also presents a fascinating dilemma, as the reader struggles to define the villains and the heroes of the story. This proffered gray area of morality is by far the most compelling aspect of the novel, and very nearly outshines everything else, including a missing person(s) plot thread, the obsessive search of a grieving wife and mother, and the gossip of a small town.

Despite minor criticisms, it cannot be denied that M.L. Stedman has still produced a ‘stay up into the wee hours of the night’ page-turner in The Light Between Oceans. The strong and realistic family bonds presented throughout the narrative will leave you very conflicted, but also highly invested. If you can stomach the drama, you will find the plot surprisingly philosophical, and ultimately very satisfying. And hey, you may also learn a thing or two about lighthouses.