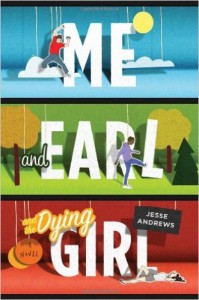 In recent years, young adult literature has been littered with cancer-related tragedies. I’m sure we can all think of a few off the top of our heads. In Jesse Andrew’s Me and Earl and the Dying Girl, Greg Gaines spends each day of high school trying not to stand out. When his mom forces him to hang out with Rachel, a former elementary school “girlfriend” recently diagnosed with cancer, Greg’s inconspicuous reputation combusts.

Greg is a sarcastic teenager with a dry wit and an obsession with avant-garde film, which is occasionally amusing, but more often than not, a bit too overbearing. Rachel is mostly defined by her room, particularly its celebrity crush posters and bright pink pillows, and of course, by her sickness, a frustrating choice that often makes her appear one-dimensional. But this book is not all about Greg and Rachel. Earl, Greg’s irreverent, yet oddly mature for his age, best friend, and Greg’s dad, a learned professor and exotic food junkie, are the true stand-out characters. While they appear in snippets throughout the book, I found myself begging for more about them, and not more about Greg and Rachel.

Unfortunately, the plot is a worn-out one, and even Greg seems to think so, as he mentions many times in the narrative that what he is writing must be extremely boring to the reader. The main problem is that not a lot happens, which may be a by-product of the high school setting. The only time I felt truly engaged was when Greg described all of the various mock movies he creates with Earl. But I honestly don’t know if that is just because I’m a huge movie fan and enjoyed the references. I must admit though that blending classic films with the mind of pre-adolescent teenagers was an extremely clever move and did add a lot of entertainment value.

Of course, the high school clique stereotype pops up every now and then. Most students are categorized into one group or the other, except Greg, who turns himself a chameleon of sorts. I have always been bothered by this simplified view of high school, and the fact that Greg actually tries to branch out into other groups is refreshing, even if his attempts to do so are only to downplay his awkwardness.

While I had my hang-ups with Me and Earl and the Dying Girl, particularly with my disinterest in its main character’s life and story, the book’s supporting cast helped me enjoy a decent portion of it. While I wouldn’t read it again, if you’re looking for a reading experience that will bring both laughter and (potentially) tears, this is your book. I should also note that the movie, which I viewed recently, was fantastic and I highly recommend it.

Me and Earl and the Dying Girl by Jesse Andrews, Review by Corinne Donnelly In recent years, young adult literature has been littered with cancer-related tragedies. I’m sure we can all think of a few off the top of our heads. In Jesse ...
0
Average User Rating
0 votes
Please sign in to rate.