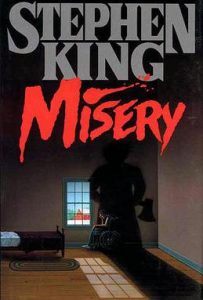 Stephen King and October certainly seem to go hand in hand. Misery, one of King’s most beloved novels, tells the harrowing story of an incapacitated author trapped in the home of a mentally unstable fan. As the plot creeps forward, things go from mildly uncomfortable to incredibly disturbing. The novel’s small cast of characters creates an emotionally charged and suspenseful atmosphere, perfect for a Halloween read.

The main character, Paul Sheldon, a popular romance author, possesses an incredibly strong voice, which captures the reader from the very beginning of the novel. Paul mostly shirks off his fame, as he strives to write more than just mere romance. His dry sense of humor and acerbic wit make it extremely difficult not to love him. The novel begins with him finishing up work on his new book, which he hopes will cement him in history as an author of real literature.

Annie Wilkes, Paul’s self-proclaimed “number one fan,” finds Paul on the side of the road after a car accident, and she brings him to her home to help him recuperate. Annie dotes upon Paul religiously, but she is also a strict disciplinarian. Her prudish tendencies lead her to commit rather contradictory and often gruesome actions. The plot takes a dark turn once the reader sees how far her fanaticism can go.

Misery is the name of the main character in Paul’s romance series. She also happens to be Annie’s favorite character. While Misery has brought Paul much wealth, she has also given him much grief…and unfortunately, she will soon cause him much pain.

Every so often, King interrupts the plot with elements of meta-fiction in the form of chapters that Paul writes under Annie’s watchful eye. Paul writes under duress and with a subpar typewriter, which King manifests realistically on the page. Impressively, both plot-lines remain equally interesting. They also parallel each other in that they both become more outrageous as the plot moves forward.

Stephen King’s Misery holds its weight as a truly terrifying novel because it is so human. The lack of a supernatural element, which is often typical in his body of work, adds an intense sense of realism to the story. The emphasis on Paul’s will to survive even as he’s verbally and physically abused amplifies one of our greatest fears: death. And yet, how much evil can a man endure before he loses his mind? Anyone would be profoundly affected by this dreadful situation. Luckily, as readers, we can just observe and enjoy the impending nightmares. Happy almost Halloween!

Tweet
Share4
Pin
4 Shares
Summary
Stephen King’s Misery holds its weight as a truly terrifying novel because it is so human.
10
Perfect

Misery by Stephen King, Review by Corinne Donnelly Stephen King and October certainly seem to go hand in hand. Misery, one of King’s most beloved novels, tells the harrowing story of an incapacitated author trapped in the home of a menta...
0
Average User Rating
0 votes
Please sign in to rate.