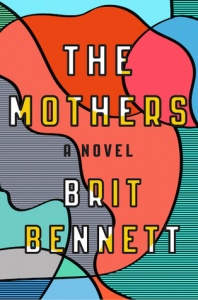 Brit Bennett’s debut novel, The Mothers, focuses on a tight-knit African American community in San Diego. Seventeen-year-old Nadia Turner falls head over heels with Luke Sheppard, the local pastor’s son. While Nadia copes with her mother’s recent suicide and Luke struggles with an injury that ruined his future career in football, they find solace in each other. Meanwhile, Nadia’s new best friend, Aubrey, moves out of an abusive home and into the welcoming arms of the church. The novel is an ambitious one as it sweeps decades, reflecting on such controversial topics as religion, racism, and abortion.

While the majority of the novel is told from Nadia’s point of view, every few chapters the narration diverts to first person plural, mimicking a Greek chorus. In this case, the narrators are the older mothers in the church chattering about the drama that unfolds around them. They consider themselves the moral authorities in the community, and they are quite vocal about what they consider to be right or wrong. Unlike a Greek chorus, they end up playing a more direct role in the plot, as their disparaging commentary ends up directly affecting Nadia, Luke, and Aubrey.

The concept of motherhood plays a crucial role in the plot. When Nadia becomes pregnant with Luke’s child, she hides it from him and the rest of the community, as she knows she would be judged harshly whether she chooses to keep the baby or not. It is difficult to keep gossip from the mothers of Upper Room Chapel though, and Nadia’s secret becomes more tenuous as time goes by. Since love interests are few and far between in small communities, when Nadia goes off to college, Aubrey finds companionship in Luke. The love triangle that ensues defines much of the emotional strife that the trio endures for the decades to come.

Bennett composes beautiful prose laced with strong metaphors. It is easy to get swept up in the moment, as her piercing descriptions force you to think about how people are perceived, and how one decision can affect those close to you in many different ways. As new revelations come and go, emotional investment will be inescapable, and you may even find yourself reveling in the forthcoming gossip as much as the mothers.

The Mothers by Brit Bennett unveils a fresh new voice to the literary world. In masterfully crafted language, Bennett’s novel will ask you to question your prejudices and pre-conceptions, and you will more than likely acquiesce to her request.