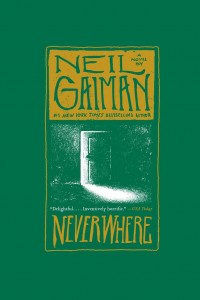 Neverwhere by Neil Gaiman takes the esteemed city of London and turns it on its head. Richard Mayhew, a Scottish everyman living in London, has a very mundane life until he runs into Door, an eccentric young lady from a magical underground world beneath its streets. A cast of bizarre and unruly characters leads the two of them on an epic adventure to find out who murdered Door’s family. While the concept intrigues, the execution falls flat, and the plot frequently borders on predictable.

The novel is considered an urban fantasy, and it is probably one of the most well-known of its kind. Gaiman offers obvious distinctions between the two worlds of London Above and London Below, but sometimes he seems to go a bit too far. Many bizarre events and interactions occur in London Below that are never fully explained. It often felt like Gaiman tossed in peculiar things just for the sake of it, and not to further the plot.

For a main character, Richard fails spectacularly at being interesting. Even Door’s oddities could not make up for Richard’s whiny attitude and lack of depth. The motley cast of supporting characters, particularly henchmen Mr. Croup and Mr. Vandemar, could only hold up the plot for so long, although most of their conversations could be considered the gold standard in witty banter.

The ending is unfortunately the most uninspiring aspect of the novel. So much thought and effort are invested in the main characters’ journey to solve the mystery, but past a certain point, everything just seems to fall to pieces. Whether it’s the predictability of it all or the hollowness of a few of the characters, something goes awry and then there is no longer time to fix it.

Neil Gaiman’s Neverwhere is certainly not lacking in imagination, but it is missing a lot desired for an agreeable read. For my first Gaiman reading experience, I left unimpressed, but not entirely reluctant to attempt to read another one of his works. If you’re just looking for an escape that does not necessarily need to be explained, give this one a try. But if you’re someone who needs to know the why’s and how’s of a fantastical world, you may end up just as frustrated as me.