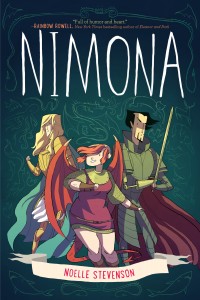 Everyone should read at least one graphic novel in their lifetime, as they are a very unique reading experience. Unlike typical novels which “tell” in words, graphic novels include images that “show” too. Noelle Stevenson’s debut graphic novel, Nimona, follows the title character, a young and rebellious shape shifter, as she charms and cajoles villain Lord Ballister Blackheart into hiring her as his sidekick. Stevenson marries the words and images on the page so well that the reader often forgets that he or she is soaking in the two formats at the same time. Unsurprisingly, Stevenson’s imagination and creative prowess impress immensely.

The graphic novel is split into many easy to digest chapters or episodes in which Ballister and Nimona attempt to a) harass Sir Ambrosius Goldenloin, Lord Ballister’s nemesis, and b) dismantle the Institution of Law Enforcement and Heroics run by the mysterious Director. While the plot tends to veer toward a formulaic structure, the character interactions and astonishing world-building keep the reader incredibly engaged throughout the entirety of the novel.

Nimona is one of the most refreshingly complex female characters conjured up in quite some time. She is also quite the force of nature. Her power, sarcastic nature, and willful independence add a wonderful and unique twist to an already interesting concept. Ballister, as the reluctant villain, and Ambrosius, as the pompous hero, also make fascinating character studies, as they complement each other brilliantly. Ballister’s angst, Ambrosius’ bravado, and Nimona’s anger issues create a whirlwind of emotions which increase the thrill factor and hasten the pace.

Nimona’s exceptional shape shifting ability emphasizes the importance of the images on the page, but not so much that it detracts from the dialogue. For such a short graphic novel, there is also a remarkable amount of character growth. You truly cannot judge a book by its cover here, as good and evil are not quite what they seem. Likewise, every character can deceive you in countless ways and you must be discerning in order to figure out who to trust.

Stevenson’s artistic vision is also incredibly fascinating. Her characters are not stereotypically beautiful; they each have their own quirks, including the pretty boy hero, Sir Ambrosius. The shape shifting ability that Nimona possesses would be challenging for even the most seasoned of illustrators, but she pulls it off with astounding aplomb and finesse.

I could wax poetic about Nimona by Noelle Stevenson for days, but I’ll stop there. The only downside to the whole experience was that I finished the graphic novel in a few hours, but now I want more! My fingers are crossed that Stevenson will gift her fans with more of Nimona’s raucous adventures soon.

Nimona by Noelle Stevenson, Review by Corinne Donnelly Everyone should read at least one graphic novel in their lifetime, as they are a very unique reading experience. Unlike typical novels which “tell” in words, graphic novels include i...
0
Average User Rating
0 votes
Please sign in to rate.