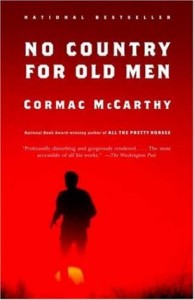 Cops, and villains, and shoot-outs, oh my! No Country for Old Men by Cormac McCarthy, most recently known as an award-winning film by the Coen Brothers, waxes heavy on the battle of good versus evil on the border between Texas and Mexico in 1980. If you haven’t seen the movie (“Shame!” *ding* “Shame!” *ding*), go do that right now, but also know that the book is just as fascinating and entertaining.

If you have not had the pleasure of reading a McCarthy novel, one of his trademarks is the way he writes. He composes his sentences in an informal manner mimicking colloquial speech. Much of the text lacks transitions, and it can sometimes be difficult to decipher who is speaking in a trail of dialogue because many of McCarthy’s paragraphs lack punctuation marks. It can take a few chapters to get used to his style, but I promise it’s worth it! I also find that the simplicity of the text allows me to read much quicker, which means I have time to read more books, and that’s always a plus.

In my opinion, Chigurh, the main antagonist, is one of the most ruthless villains ever written. His actions are cold and callous, and he often commits violence just for the heck of it. McCarthy’s eloquently simplistic writing style adds to the haunting quality of Chigurh’s persona. He is truly unforgettable. Sheriff Bell, the main protagonist, while less memorable, still packs quite a punch. I can only describe him as the thinker of the novel. Bell often compares and contrasts his past and present, which ultimately leads him to some intriguing, perhaps biased, conclusions about whether or not his town is going to hell in a hand-basket.

The theme of moral judgment runs rampant throughout the novel. McCarthy gives each of his main characters their own very different moral compass. The plot is most interesting when the characters act on behalf of those beliefs. Of course, it also means that the plot gets insanely complicated and brutal. Oddly enough, the scenes of violence are rather succinct, so if you’re squeamish you’ll probably be alright. I never thought I would say this, but the novel actually strikes me as more philosophical than action-packed, and that’s not a bad thing.

Cormac McCarthy’s No Country for Old Men holds its own against its film adaptation. For the most part, the book and movie are very similar, but having the ability to read the text adds an extra oomph to the value of the story. Even if you’ve seen the movie, I’d definitely give this one a read.