Check out our quick takes on new and upcoming streaming content based on books. Explore insane asylums, vampire lairs, and not-so-healthy health resorts in books and onscreen. 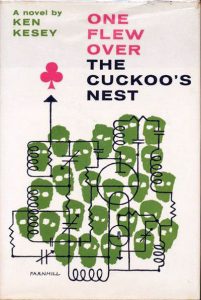 One Flew Over the Cuckoo’s Nest, by Ken Kesey

Ratched, the latest Netflix series from Ryan Murphy (American Horror Story, Hollywood), is based on a notorious character from this seminal novel first published back in 1962. Thirteen years later, it was made into a film with Louise Fletcher in a tour de force performance as the sadistic Nurse Ratched. Now it’s Sarah Paulson’s turn to shine, playing the same character—albeit very differently.

While the show is a full-on homage to film noir by way of Alfred Hitchcock, the novel is nearly incomprehensible. I tried to read it, but I only got through a few chapters before closing it for good. Not only is it dated, author Ken Kesey was famous for his LSD experimentation… and it shows. This is quite a disjointed head-scratcher of a tale. One Flew Over the Cuckoo’s Nest may be deserving of its classic status—I understand it was quite audacious for its time and meticulously researched—but it wasn’t for me. Although, I do like the fact it’s a banned book (from high schools, for being “too counterculture.”) 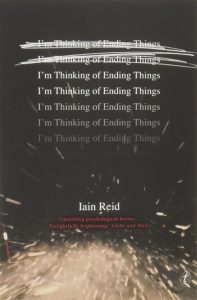 Reid’s 2016 debut quasi-horror novel is a page-turner, to be sure. Plus, it won NPR Book of the Year and got the coveted max number of stars from Booklist (“dark and compelling… unputdownable”). Written in the first-person, from a young woman who’s thinking of ending her relationship with her boyfriend, the unsettling tale brings to mind Michel Faber’s cult classic Under the Skin, and Lionel Shriver’s chilling book We Need to Talk about Kevin. As the book progresses, the story becomes weirder… and the ending is left open for interpretation.

Bearing the horror themes in mind, I was somewhat surprised to see that Charlie Kaufman, a writer-director who’s best-known for his absurdist, surreal comedies, made a film out of I’m Thinking of Ending Things. It’s on Netflix, and while I haven’t seen it yet, the buzz suggests the adaption bears little resemblance to the source material. [Read Aaron Neuwirth’s review here.] 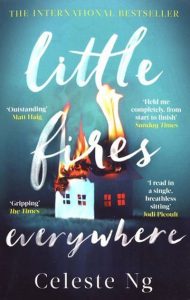 This 2017 novel was so lauded, it was impossible to ignore. It was featured in every celebrity’s book club, won awards, garnered thousands of positive reviews, and stayed on the New York Times’ hardcover-fiction bestseller list for 48 weeks! I don’t usually read domestic dramas, but even I couldn’t resist the lure. The book is ostensibly about two families living in Shaker Heights in 1997 who are brought together through their children, but there’s more to it than that. There literally is a fire, and the whodunnit is revealed little by little. The novel is well-written, but it’s no thriller. I struggled to finish it.

The Hulu series, spearheaded by Reese Witherspoon, who stars and produces, goes deeper into the racial and class aspects of why the two women (the other is played by Kerry Washington) don’t get along. While I relished Witherspoon’s nuanced performance, I found Washington’s take overwrought (and yet, she was nominated for an Emmy, so who am I to say?). The series has a rocky start, but it ropes you in. 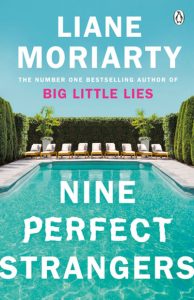 After the massive success of Big Little Lies, Nicole Kidman would be a fool not to snap up another one of the author’s books—so that’s exactly what she did. Instead of HBO, this one is headed to Hulu. The official logline for the Nine Perfect Strangers adaptation reads,

“It takes place at a boutique health-and-wellness resort that promises healing and transformation as nine stressed city dwellers try to get on a path to a better way of living. Watching over them during this ten-day retreat is the resort’s director Masha (Kidman), a woman on a mission to reinvigorate their tired minds and bodies. However, these nine ‘perfect’ strangers have no idea what is about to hit them.”

I recently finished listening to the audiobook version of Nine Perfect Strangers. I didn’t know it had been optioned, yet I kept thinking, “This would make a great TV series.” As a novel, it is definitely not Moriarty’s best. I mean, it’s good because she is a tremendous writer, but with all the different characters and overlapping points of view, I believe it will be better as a visual. And Kidman will nail it as the domineering, slightly unhinged guru! 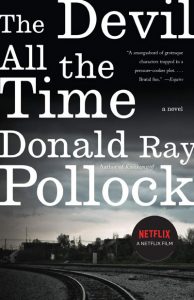 The Devil All the Time, by Donald Ray Pollock

The Devil All the Time marks the debut of Donald Ray Pollock, published in 2011. The sordid story takes place over a span of 20 years, starting in the late 40s. It follows a band of rather disparate characters— a shellshocked war veteran, a husband and wife team of serial killers, and a false preacher—throughout their travels in rural southern Ohio and West Virginia. This is quite a violent book, peopled with unsavory sorts pasted against a grimy, immoral landscape where lives are brutally ended with all the casualness of stomping out a cigarette. It’s the kind of story that sticks with you and makes you think.

The movie, a Netflix original, debuts in mid-September. I haven’t seen it yet, but I’m encouraged by the cast, which includes Tom Holland, Robert Pattinson, and Riley Keough. Also, I have enjoyed director Antonio Campos’s previous films (Christine, Martha Marcy May Marlene), so this one is in my watchlist for sure! [Check out Joseph Braverman’s review here.] 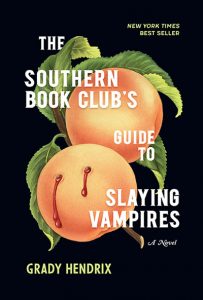 Hendrix has written a few drolly, humorous, thought-provoking supernatural horror bestsellers (My Best Friend’s Exorcism is just one), but this, in my opinion, is his best. I tore through The Southern Book Club’s Guide to Slaying Vampires, racing through each chapter to see what would happen next. Folks are calling it “Fried Green Tomatoes and Steel Magnolias meet Dracula,” and they’re not wrong—though I would throw in a little Fright Night as well.

The novel has only been out for a short time, but the rights are already sold. No cast or directors have been announced as of yet but look for it on Amazon Prime when the time comes. 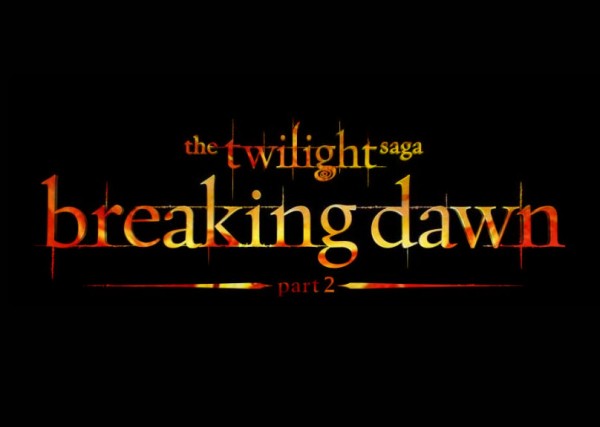 Check out our quick takes on new and upcoming streaming content based on books. Explore insane asylums, vampire lairs, and not-so-healthy health resorts in books and onscreen. One Flew Over the Cuckoo's Nest, by Ken Kesey Ratched, the lat...
0
Average User Rating
0 votes
Please sign in to rate.