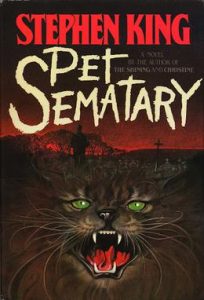 In the introduction to Pet Sematary, Stephen King states that he considers it one of his darkest novels, and in fact, it almost wasn’t published at all. I surmise this is because it’s one of his most human novels. There are supernatural elements throughout, and in typical fashion, they’re haunting and unforgettable, but the true emphasis is human nature, death, and grief.

Dr. Louis Creed, his wife, and his two children move to a new home in the small town of Ludlow, Maine, when Louis is hired as a physician at the nearby university. Upon their arrival, the young family comes to the acquaintance of their elderly neighbors, Jud and Norma Crandall, long-time residents of the town. As Louis and Jud take a quick, almost familial, liking to each other, Jud brings the family on a hike of the surrounding land, including a tour of the local pet “sematary” created and tended to by the town’s children. While Louis finds the pet cemetery (and therefore, death) natural, something rankles him about the ancient Indian burial ground that lies beyond it. As the weeks and months pass by and tragedies begin to occur, Louis’s fascination with the burial grounds becomes an unnerving obsession and his once logical brain is brought to its limit.

“The soil of a man’s heart is stonier, Louis. A man grows what he can, and he tends it. ‘Cause what you buy, is what you own. And what you own…always comes home to you.”

Louis Creed is an everyman character: intelligent and logical with a deep love for his family. It is so easy to relate to him and to become invested in his (and his family’s) well-being. As tragedy after tragedy befalls them, Louis’s descent into madness is believable because it’s gradual. It’s also predictable, which in this case, is not a bad thing. It’s a purposeful formulaic structure. Inevitability fuels dread, and the ever-growing sense of dread is what makes this novel so terrifying.

Grief, especially when life is cut short unexpectedly, is a very personal experience. As Louis is bombarded with death, not just in his job, but in his private life too, the book feels more intimate. It forces the reader to question what he or she would do in Louis’s situation. As his mind slowly falls apart and he makes some questionable decisions, we ask ourselves, would we react the same way? And if we did, would the result be worth it?

Pet Sematary by Stephen King reflects on how one man’s grief and refusal to accept the inevitability of death leads to the direst of consequences. It’s an incredibly dismal book with some truly memorable and horrific scenes, but the philosophical questions it raises leave the strongest impression.

Tweet
Share62
Pin
62 Shares
Summary
Pet Sematary by Stephen King reflects on how one man’s grief and refusal to accept the inevitability of death leads to the direst of consequences. It’s an incredibly dismal book with some truly memorable and horrific scenes, but the philosophical questions it raises leave the strongest impression.
10
Perfect

Pet Sematary by Stephen King, Review by Corinne Donnelly In the introduction to Pet Sematary, Stephen King states that he considers it one of his darkest novels, and in fact, it almost wasn’t published at all. I surmise this is because i...
0
Average User Rating
0 votes
Please sign in to rate.