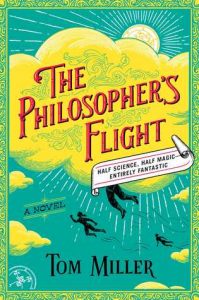 Robert “Boober” Weekes has a problem. He’s male and wants to be a corpswoman. Easier dreamed than done. The Philosopher’s Flight by Tom Miller is set in 1917 in an alternate universe where women, gifted with a powerful affinity for sigilry, have become the stronger sex. Sigilry stems from the science of empirical philosophy, the study of how to manipulate elements into glyphs, and in so doing, facilitate the execution of a variety of magical acts, from hovering to communicating across hundreds of miles to even dissolving all the bones in the human body. While men can study the subject, women have the ability to put it into practice. Robert, born into a family of powerful women, can perform sigilry, if weakly in comparison to his mother and sisters, but has high hopes that one day he will be recruited into the most elite unit of the Corps, Rescue and Evac. Upon his unexpected acceptance into Radcliffe, a predominantly female university, he must overcome a variety of impossible hurdles on the path to achieving the recognition he deserves.

Aside from the outlier of a prologue which felt more like a history lesson than an introduction to a fantasy novel, the story is separated into three parts: Robert’s time in Montana working as a clerk for his mother, Robert’s first few months at Radcliffe, and finally, Robert’s last few weeks of study prior to setting off into the real world. The last two parts of the novel surpass the first on every level. Where the first third focuses on Robert’s frustration as he whines from page to page about not being taken seriously and (rightfully) complains about his abominable nickname, his attitude improves considerably upon his arrival at Radcliffe.

The introduction of a diverse group of complex female students with intriguing back stories who also exhibit “masculine” behaviors made for a riveting reading experience, one that I found both unexpected and refreshing. Robert’s eventual love interest is more than just that, she is a war hero, a political activist, and has a knack for one of the most dangerous sigils. Unfortunately, most of the adult figures, the female professors, politicians, doctors, etc., blend together. They have shallow inner lives, and fall victim to Miller’s attempts to report their pasts via excerpts from textbooks, newspapers, and speeches.

Each chapter begins with quotes selected from historical documents, ranging from the mid- to late-1800s and the rise of empirical philosophy, all the way to the mid-1900s, which provides the reader with a glimpse into the futures of the main characters. While a clever idea, its execution is shabby at best. The context these excerpts provide is not necessary, especially when Miller already waxes heavy on historical events throughout the body of the novel. The quotes also break the flow of the plot, as they mislead the reader into thinking about the connection between the excerpt and the chapter that follows. Spoiler alert: there often isn’t one.

Tom Miller’s The Philosopher’s Flight is an ambitious debut, an attempt I respect, but that I ultimately didn’t enjoy. The reverse gender dynamic, a sensitive topic to cover, was executed extremely well, but was at times overshadowed by too much exposition and too many plot threads. The ending was also highly underwhelming, and so abrupt that I thought pages were missing from my book. For such a unique novel, it’s a pity that it was not executed as well as I had hoped.

Tweet
Share2
Pin
2 Shares
Summary
In an alternate universe where women, gifted with magical abilities, have become the stronger sex, a young man sets out on a journey to become the first male member of an elite unit of flying medics.
5
Average